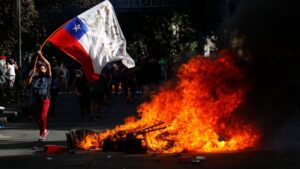 Recently, with all the confusion over Brexit and the various misdemeanors of our radical friend President Trump the political state of other countries has not reached our news; that is, unless it concerns us. In fact, the Chilean Spring has been ongoing for the last twenty-two days and has received very little media coverage. When I searched it up I was met with “the five best places to visit Chile in spring”, a far cry from the reality.

The actual reality is that the country has been in a state of emergency since the 17th October, with riot police backed by the US government. The corruption and mistreatment of the general population has brought about civil disobedience and rioting. Over one million citizens have joined the protest, and it is seen to be the worst civil unrest since that to end the dictatorship of General Pinochet. Originally caused by the increase in transport tax, the riots have become much more than that. Sick of the inequality that plagues their country – for instance, 33% of the wealth in Chile is controlled by 1% of the population – the rebels have some goals that if implemented would give them a higher standard of living: reduced charges to transport, education and the minimum wage being among then. They also are calling for the resignation of President Piñera, a member of a centre-right party named National Renewal. As he has a huge net worth, it’s easy to see how the Chilean citizens are calling for his removal.

Furthermore, the Chileans are asking for a revisit or complete change of the Chilean constitution. Currently the constitution of Chile is that of the dictator General Augusto Pinochet. It was put into effect in March 1990 and is considered illegitimate and undemocratic to the citizens for the following reasons.

Firstly, it was drafted by a commission hand-picked by an authoritarian dictator who had chosen authors sympathetic to his cause. Secondly, it was voted into action by a referendum in 1990, a time period in which Chile was still controlled by a military dictatorship; therefore, it can be gauged that this referendum was not a free one. Thirdly is the content of the document. The constitution limits what issues can be voted on by referenda, as well as limiting the citizens’ other opportunities to get involved in political decisions, therefore limiting the people’s power via direct democracy. It does not make explicit how it may be replaced, and hence it is hard to do so legally and with no struggle.

Fourthly, experts comment on the authoritarian and capitalist bias of the document, for instance the systems of social rights such as social security, health, education, work and trade unionism are written as less significant than private property and entrepreneurship. This further entrenches the capitalist ideology of the constitution, which subsequently angers the people today suffering from the injustices of a vast wealth gap and sky rocketing price of living (Chile is reported to have the highest cost of public transport worldwide). The rioters are hoping to gain a higher standard of living and some more radical rioters want completely to overthrow the governing classes and have a structural change of the Chilean economy.

As these are the amongst the largest marches in Chile’s history, they should not be ignored. Whilst the debate is rife at home about the upcoming election, we must look beyond ourselves to these people who are being mistreated by a CIA- backed oppressive government acting on a piece of paper written and enacted in a time of such cruelty and mistreatment.