Skip to content
Cranleigh School Blogs / Politics Department Blog / Political Theory / How would politics be different if women had always been equal in power to men? 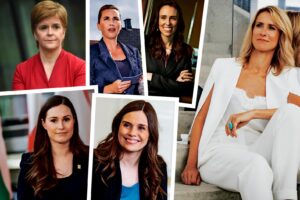 Women’s formal influence in politics can be dated back to 1918 through the Parliament
(Qualification of Women) Act which enabled them to become MPs, and to 1928 with the
creation of the Representation of the People’s Act which gave all women the right to vote.
The question of how UK politics would be different if women had always been equal to men
in political power is therefore a substantial one as political gender equality has been such a
recent, and still ongoing, occurrence. This essay will argue that if history was rewritten to give women a fair share of political power since the beginning of UK politics then party ideologies, the political system (in terms of the electoral system, the UK constitution and human rights policies) as well as governments’ reactions to emergencies, especially war, (whilst taking into account the exception of women such as Thatcher) would be different.

There would likely be a change to party ideologies if women and men had always been equal
in political power. The fact women have only been able to become MPs since 1918 and able
to vote since 1928 means that before this, when the parties were truly being created as well
as finding their principles and reputations, only men had a say in a party’s policies which
would have an effect on parties’ doctrines. For example, the root of the UK’s two main
political parties stemmed from the ‘loose groupings’ of Tories and Whigs which steadily
became proper parties from roughly the 1840s onwards. Labour was then seen to emerge in the 1900’s as the Liberals faded away in the 1920s. Throughout all this, women did not have
the vote but, if they had, it is possible to consider that a centrist modern liberal ideology
could have been carried, which may have changed the course of the Liberal’s narrative.

In particular it can be argued this potential ideology may have followed in the footsteps of Mary
Wollstonecraft, an author and philosopher who was an important early advocate of women’s
rights, and, most importantly, was seen as a liberal feminist. (Especially through her book; A
Vindication of the Rights of Woman.). Moreover, policies would’ve needed to be favourable
with the whole of society instead of just roughly half and so, with women in equal positions
to men in government, there would likely be an effect on policies produced. If one looks back
to how the foundations of the patriarchy were formed, such as by the exclusion of women
from politics and even the democratic system, we can see how certain laws may never have
been introduced if women were politically present. An example of this is the Law of Property
Act of 1922 where women were given equal rights to inherit property, legislation was then
passed using the Act in 1926 allowing women to hold and do what they might with property
under the same terms as men.

If women had been present at the beginning of democratic politics then this Act may never have been needed as ‘agnatic primogeniture’ (the passing down of property to the first-born son) may not have existed. This change to policies would have been significant to beliefs political parties hold. Society would be affected by such impacts as it would put the nation several decades forward in the fight against sexism; changing peoples’ beliefs as they see the elected government make decisions to better the
rights of women. It can be argued that these policies that make a change for equality can be
viewed as progressive politics (examples include Acts such as the Equal Pay Act, the Sex Discrimination Act, the Equality Act.) Overall, with women equal in power to men there would be a difference in party ideologies because of women’s earlier involvement with politics leading fundamental policies to change, shifting the very nature of party ideologies towards a more progressive stance

Another way that politics would differ if women had always been equal in power to men is a
change to the political system itself in terms of the electoral system, the UK’s uncodified
constitution and human rights policies. Firstly, it is possible to see the voting system of
FPTP changing around a more ‘progressive’ idea such as one that is able to foster more
coalitions to begin doing politics by consensus (creating more Cabinet governments.) This
can be seen in countries like Estonia, which, with the use of a proportionally representative
voting system, is now one of only 10 countries globally that have a woman as their leader. In
fact, Estonia is the first country ever to have two women serving as the Head of State and
Head of Government simultaneously.

This would most likely be different if women had been equal since the beginning in politics as it helps women because under the current single-member constituency system much of the electorate are reluctant to pick a woman as their only vote due to the excuse “that they believe some voters will be less likely to vote for a woman instead of a man” and so to give their choice the best chance they vote for a man, but if several candidates are chosen then this problem wouldn’t exist and it is advantageous for a
ticket to include all genders as a list of only five male candidates would alienate some voters. It has been found that all West European countries where the number of women in Parliament exceeds 20% have adopted a proportional system of some kind.

Other changes would occur that haven’t to protect the patriarchy and the traditional hierarchical system, for example there may have been a creation of a codified constitution and British Bill of Rights which can be seen to better protect rights due to their entrenched nature. This would mean women’s rights couldn’t be overly controlled by men or be as flexible. For example, when men returned from both World Wars women who had taken up jobs to help fill vacancies then lost them to veterans. This right to work and the need for a legitimate reason to fire could have saved many women suffering if it had been installed in a codified constitution. Overall, a change to the political system would have taken place if women had always had a fair voice in politics because they would recognise a necessary shift for the bettering of their
rights and opportunities would be to have a proportional electoral system and an established codified constitution and British Bill of Rights.

Arguably, the government’s reaction to emergencies would change if women had always been equal in power to men, therefore holding similar positions in government. For example, if we were to look at the example of war, there is evidence to suggest that “women don’t like war and men do”. Women are generally more likely to push for diplomatic measures and increased dialogue ahead of a war. Even in times of war it is fair to believe they are more likely to work together than lead proudly as seen in several instances, such as the Somme where Haig Somme’s egotism and arrogance has been blamed for the 1 million casualties.

This differing view of war between women and men comes from their separate historical societal obligations, where women were to stay home and wait for their sons and husbands
to return alive whilst men have been expected to take up arms and be proud to fight for their
country. Therefore, if women had been equal in power in politics then emergencies like wars
would be handled very differently. However, it is important to note the obvious exception to
this generalisation in Margaret Thatcher who actively went to war, such as the British triumph of the Falkland Wars which boosted her popularity. Thatcher provides proof that for many women war is not something to avoid at all costs and the opposite is true for many men, but on the other hand, it is reasonable to say that, due to their alternative perspectives, women in politics would handle war differently with a decrease of actual violence and an increase of communication.

In conclusion, the very nature of UK politics would be impacted dramatically if women and
men had always been equal in political power. Party ideologies would be more progressive
due to a change in the policies of parties to impact equality more. Furthermore, the essence
of the UK political system would be altered via the potentiality of a more proportional voting
system being supported and implemented which gives women a fairer chance to be voted in,
and the patriarchy may have been damaged by a codified constitution and British Bill of
Rights which could hold women’s rights to the same significance as men’s. Finally, the
handling of crises would be impacted, particularly in terms of war, due to a difference in
perspectives because of societal duties and so women in higher positions of power would
likely heavily promote political discourse over violent action.