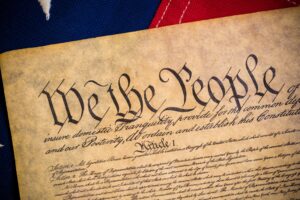 Daisy’s excellent article on the current civil disorder in Chile hinted at some of the problems of producing a codified constitution. Noting that the demonstrations are left-wing in nature (against the centre-right government of President Piñera), she highlighted how many in Chile regard the constitution as having a pronounced neo-liberal bias (effectively a Thatcherite bias: General Pinochet, the military ruler who was essentially the architect of the constitution, was close to Margaret Thatcher regarding economics). The left-wing demonstrators have a problem with a constitution that bakes in safeguards for private property and entrepreneurship, but has little to say on workers’ rights, welfare, and other socialist causes. Drafted by right wing authors and ratified in a 1980 referendum of dubious legitimacy, it is small wonder that this document has come under criticism.

Yet we could flip the whole scenario around. We could perhaps take a look at a left-wing constitution – the Venezuelan one for example, which entrenches the right to free state healthcare for all, and contains clauses geared towards the creation of cooperative ownership of businesses. I am not aware whether any of the mass demonstrations against the government of Nicolas Maduro have demanded constitutional changes, but under the hard-line socialist Chavista government, Venezuela has become a bankrupt failed state in spite of its vast oil reserves, and the government’s legitimacy is bust.

All this has relevance to the debate on whether or not the UK should codify its constitution. The thing about the two constitutions discussed above is that both have a clear ideological bias in different directions. Both were clearly rigged in their creation, and neither command a deep legitimacy. The process of codification itself was flawed, and the contents of the document are thus not neutral. They reflect their authors’ political goals and prejudices.

This would be exactly the same with us. Imagine a decision to provide an over-arching codified constitutional document for the UK. How would this be done? The international model of choice seems to be some sort of elected constitutional convention to draft it, followed by ratification by referendum. We might do something like that, or leave it to parliament to do the drafting. But whatever way we did it, we would have the mother of all arguments.

A bill of rights. Simple surely? Not at all! The Tories would want to stick to a set of simple negative freedoms along US Bill of Rights lines, and leave it at that. Their Thatcherite wing might look for the Chilean option, cementing neo-liberal ideology into the legal framework.

The Lib Dems might endorse this, but you can bet they’d also want to see the entitlements of the modern liberal state entrenched in perpetuity as well. Education, the NHS and all that would suddenly not be amendable or adjustable, but codified and unchallengeable. Need to raise tuition fees to balance the budget? Sorry, that’s unconstitutional. Prescription charges to avoid bankrupting the NHS and the state? You can’t do that without a two thirds majority in both houses of parliament and a referendum I’m afraid, because those free prescriptions are now a codified right.

Labour would want to go much further. Minimum wage in the constitution? Entrenched Trade Union rights? Four day week? Sorry, but you can’t work on Friday – it violates your constitutional freedoms. They’d probably get Plaid Cymru to support them on all this, provided that the Welsh language was given equal status in the constitution, and Wales had devo-max along Scottish lines, codified, forever.

Then there’s all the identity politics and the “fairness” agenda. Equal gender pay, racial quotas, and all the other dreary paraphernalia of illiberal liberalism will be shoe-horned into the vast, sprawling mess of legalese that will bind all future political debate to be settled by the judgement of the courts, not by the elected representatives and appointed experts in parliament.

The EU? The Tories would sure as hell demand a clause that stated we could never again join such an organisation without a super-majority referendum saying so. The Lib Dems would demand confirmation of close alignment with the EU and a simple majority back-in referendum every four years.

Relationship between Westminster and the devolved assemblies needs clarifying? You betcha! The SNP would demand devo-max, autonomy in taxation and foreign policy, the right to an indy-ref every five years, and so on. The Tories would demand final entrenchment of the existing arrangements, and an end to further devolution.

I could go on, but I have probably made my point. That point is that “basic rights” are in fact historically contingent and ideologically coloured. There would be no consensus on what to put into a codified constitution.  So, if this debate emerges from its dormant condition post-Brexit, my opinion is that we should ignore any siren songs about codification producing clarity or consensus. Both the process and the product would give us just the opposite. We are far better sticking with our organic, flexible, developing constitution which functions on convention and mature political culture (which Britain does have, for all that the critics may carp). Let’s follow Winston Churchill’s advice, and keep b*ggering on!