Skip to content
Cranleigh School Blogs / Politics Department Blog / UK Politics / We are about to have a second referendum, it just won’t say it on the label 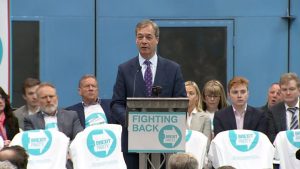 He’s back! What a spiffing fellow, Enoch Powell’s cheerier heir, with his pint and his fags and his coat a bit like mine. He’s just the sort of officer class public schoolboy that the northern proletariat will vote for in droves I’ll wager, and with proper deference to boot! Nigel Farage represents people who want to be from somewhere, not just from anywhere, but who are not racist in any meaningful sense of the term (hence why Nige has binned UKIP, which had taken a bit of a turn for the worse). He wants out hard, and he’s certainly not afraid to say so, and if you want that too, you’ll vote for him in the European Parliamentary elections. He’s got the dosh (probably from Aaron Banks, though we are told it is from an army of small donors), he’s got the candidates lined up along with most of the Tory grass roots to pound the pavements for them, he’s got Strictly Come Dancing sensation Anne Widdecombe on the ticket, and he has a simple, compelling banner – the Brexit Party.

Then there are his mortal enemies, the very catchy sounding “Change UK/The Independent Group”. Only Chuka Umunna could have come up with that hybrid of tech-era cheesiness and general vagueness. His “new type of politics” will doubtless decide all things by committees and confusion. Only a bloke who wears a suit and a shirt, but then makes a point of not wearing a tie, could possibly come up with a party called that, and then not actually put himself in charge of it! Anyhow, they want hard back in, via a gerrymandered second referendum in which the leave vote is split between two other options: May’s deal (unpopular and pretty dire) and no deal (which everyone is always being told to be terrified of). So, Chuka and the gang are for re-setting the clock. Change UK are not up for change in the UK. Remainers will flock to them, I reckon.

With the battle lines thus drawn, we may witness on 23rd May a turnout far in excess of anything we have ever seen before for European elections. And this going to be about one thing, and one thing only: where you stand on Brexit. If you want out by the decision of the original referendum (which was hard Brexit, no Customs Union, no Single Market, no matter what anyone may have since claimed – and I say that as a man who voted to remain in 2016) then you will vote for the Brexit Party. If you want May’s deal, you’ll vote Tory, I think, though her deal seems to command little popularity and the Tories are so clearly split that I think they will be slaughtered in this election. If you want firmly in, you will vote Change UK. Or you’ll vote Lib Dem; or Green; or SNP; or, come to think of it, pretty much any party other than the Brexit Party and UKIP.

And herein lurks the peril for the remainers. It is striking that, thus far at least, there has been no remain electoral pact between at the very least the Liberal Democrats and Change UK. Apparently Plaid Cymru and the Greens were planning some sort of joint ticket but could not agree on it – thus squandering what would have been a truly mighty electoral coalition. Perhaps they were all blind-sided by the EU’s concession of the so-called Halloween Extension until 31st October. The remain movement is split and disorganised. Only Farage seems to have all his ducks in a row. We could therefore see a huge tranche, a Great Silent Majority, voting for the Brexit Party. If that is the case, what we will be looking at is nothing short of a clear mandate for a hard Brexit. We will be looking at a second referendum, in effect, even if Farage shares some of his votes with UKIP.

More likely perhaps is that the majority of votes go to remain parties. Yet if this is the case, then the result will be less clear because they are split. With the exception of Change UK, all are long-established parties with broad programmatic policy mixes that span far more than British relations with the EU (UKIP and the Brexit Party are single issue entities, especially the latter). So if the remain vote comes out as a majority, but dispersed across Labour (unclear policy, but very soft Brexit), the Lib Dems, the nationalist parties, the Greens and Change UK (all firmly remain) then it will be a far muddier mandate, perhaps not a mandate at all. It will be easy to claim that voters had made decisions along traditional party lines rather than on the issue in question. If turnout is not that high, it could plausibly be claimed that the oft-caricatured Brexit voters of 2016 just didn’t make it out of Greggs or Betfred to get to the polling stations. If the vote goes to the leavers, it’s a mandate. If the vote is to stay, it’s just Brexit fatigue and general apathy.

So this is a moment of danger for the remain cause. They have failed to forge a decisive alliance and they lack strong leadership with only three weeks to go. What then happens is that Tony Blair weighs in, or someone smug and cosmopolitan like George Osborne or Nick Clegg says something hifalutin or patronising from somewhere like Monaco or Capri. Then Mark Carney starts telling everyone that if we don’t vote for Change UK, then within five years 8.3% of GDP will go up in smoke. I may share much with Mark Carney – the intellectual gravitas, the debonair looks and the all-round Davos Man suaveness spring to mind – but we diverge in our attitude towards independent public bodies displaying implicit but very obvious political bias using pie-in-the-sky statistics that any economist can tell you have no more integrity than the dregs in your tea pot. Our apathetic Brexit types will see all this. They will put down their pies and pints and stub out their Lambert and Butlers, and they will follow their knight in shining armour Nigel Farage all the way to the voting booth just to stick it to the slick multicultural metropolitan types; types like Chuka Umunna, in fact. And, to give them their fully deserved due, they will do this because they know what the European Union is, and they want to leave it.

Farage is a remarkable politician. Even if you loathe him, his integrity is crystal clear. He cannot be accused of some power grab, because he wishes to win an election to a body that he then wants to leave. He stands against a genuine great betrayal, because if you are to have a referendum then you must abide by the decision that it delivers. Next to the stereotyped Brexit voter I have described above is aligned another voter that is politically informed, and politically principled, and is turned off by the shrill hypocrisy of the remain movement and the polarisation of British politics that their campaign has attenuated. Farage could swing this vote. If he does, then we may actually, finally, see some recognition from the overwhelmingly pro-remain political and media class that the decision to leave the European Union must be properly honoured. This could be our second referendum in all but name, and I genuinely hope that it serves up something that stops us from the terrible political and constitutional damage that an actual, formal second referendum would undoubtedly wreak.