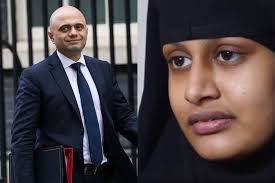 Walpole had an interesting discussion with a friend over the past weekend on the subject of past pupils and what they have gone on to achieve. Whilst Walpole proudly spoke highly of the achievements of a certain Politics alumni of 2018 making his debut at the Las Vegas rugby sevens, he was somewhat stunned by the revelation from his friend’s claim that they had taught GCSE History to a certain Ms Shamina Begum whose face was adorned on the front page of every newspaper in the United Kingdom. Not only Ms Begum, but also her two other school friends who all, in 2014 left Bethnal Green in London for Syria to become members of the IS Caliphate.

Begum is the only one of the three whose whereabouts is currently known. She is currently housed in a refugee camp in Syria, following the defeat of IS and has recently given birth to a baby boy. The controversy has come from the fact that she now wants to return to the United Kingdom with her child. Her husband, also a member of IS, is currently in a Kurdish detention centre in North Syria, has Dutch citizenship and also wants to return to his home country. Had they both repented, acknowledged that their actions were wrong, claimed that they were brainwashed or forced into joining IS, then both the UK and the Netherlands perhaps might have been a little more sympathtic to their cause. However both have shown little to no remorse for joining one of the most barbaric organisations in recent history, showing scant regard for the consequences of their own actions, yet still believe that they have the right to return home without any restrictions being placed upon them.

Enter Sajid Javid, Home Secretary and Conservative rising star. As eluded to by von Hayek in last week’s excellent blog, Javid is one of the front runners to succeed Theresa May when she is finally ejected from the Conservative leadership by the ‘men in grey suits’. However Javid has a quite a large mountain to climb if he does want to become Britain’s first ever BAME Prime Minister and compete the fairytale story of One Nation Conservatism that he epitomises in his values (Javid’s father emigrated to Britain from Pakistan with only £1 in his pocket and became a bus driver).

Javid was a ‘remainer’ in the 2016 referendum and is still perceived as being more ‘Cameronite’ in homage to his former Prime Minister who granted him his first ministerial job. This is likely to give him some good standing among the Parliamentary Conservative Party, who are more likely to back a moderate figure in a leadership election, knowing full well that someone from the fringes of the party is unlikely to attract support from the wider electorate, as seen in recent history with the likes of William Hague, Iain Duncan Smith and Michael Howard. However, under the Conservative Party leadership election rules, after the MPs have whittled down the contenders to the final two, it is then the grass roots party members who have the final say. And this is where Javid’s problem lies. The Conservative membership at this level is much further to the right and far more pro-brexit than the Conservative MPs themselves. This means that if, say, Javid managed to get into a run off against Dominic Raab, the latter’s brexit credentials would likely hand him an easy win.

So what does this have to do with Shamima Begum? Well as Home Secretary, Javid has certain powers when it comes to the granting and rescinding of citizenship rights. This has presented him was a fantastic opportunity to show off his more authoritarian nature to the Tory hard liners by using Begum as his political football. The day after Begum’s story hit the pages, it was announced that she had received a communication from the Home Office that stated that she was no longer a British Citizen. Now Javid knows full well that he does not actually have the power to do this. It is illegal to make somebody stateless (i.e take away their Citizenship if they do not have another one). The Home office claimed that Begum could claim Bangladeshi Citizenship though her parents (even though she does not have it already) or Dutch Citizenship through her husband (which she also does not currently have). In response, the governments of both Bangladesh and The Netherlands have both stated clearly that Begum is not currently and will not become a citizen of their country.

Javid has not made a mistake here. It is pure political cunning at play. Knowing full well that he could not possibly make Begum ‘stateless’, he has attempted to do this none the less, in the knowledge that this will eventually be challenged in the courts, quite likely the European Court of Human Rights (ECHR), and after a lengthy process, the ruling will be the Begum can indeed return home to the UK. However this would allow Javid to claim that he had attempted to do everything ‘within his power’ to hold Begum to account for her actions but was thwarted by the actions of an external body (the ECHR), allowing him to pivot back to the 2015 Conservative Manifesto promise of scrapping the ECHR in favour of a ‘British Bill of Rights’, thus allowing him to take Raab head on over questions of sovereignty with Brexit (hopefully) done and dusted.

Shamima Begum will eventually return to the UK, which is in fact her right as a British Citizen. What Javid should actually look to do, rather than playing political games, is put forward retrospective legislation to deal with citizens who have left Britain to join violent, extremist groups so that Begum, and others returning from IS can be held to account for their actions in a court of law.