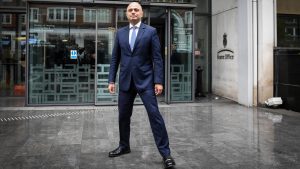 I have a couple of things to add to Walpole’s post earlier this week on Sajid Javid’s manoeuvres regarding the Begum case in order to burnish his Eurosceptic credentials and leadership ambitions.

Firstly, Javid is not really such a One Nation Tory as Walpole suggests. True, he has a good rags to riches story. But this marks him out as a self-made man, and often such politicians within the party can be more inclined towards Thatcherite neo-liberalism. In fact, once per year Javid reads the full courtroom scene from Ayn Rand’s seminal novel and libertarian tract, The Fountainhead. In this, the rugged individualist hero Howard Roark defends his stance against, basically, socialism with excoriating pronouncements, lauding capitalist businessmen as “creators” and denouncing socialists – or indeed any politicians who advocate high levels of state welfare and economic intervention for the public good – as “parasites”. Here are some snippets:

This is nothing short of a moral clarion call for free-market, small state classical liberalism. Rather like my eponymous economist and philosopher Friedrich von Hayek, Ayn Rand was a loud voice in the dark during the 1940s, when post-war big state New Dealers and Labour politicians held sway on both sides of the Atlantic. Javid is therefore no One Nation, “Red Tory”, big state kind like Theresa May, Ian Duncan-Smith or (to an extent) David Cameron. He is an authentic Thatcherite. Irrespective of his Brexit stance, this is something that may well appeal to the Conservative Party base.

Secondly, we should keep our eye on how Javid handles the current issue of knife crime. I have no doubt that he is entirely sincere in his determination to do all that is necessary to bring this apparent crime wave under control, in the same way that I have no doubt he despises all the Shamina Begum stands for. We should not judge his actions purely by his political ambitions. But if he does wring concessions from Theresa May (who is copping some blame for police cuts on her watch as Home Secretary) and money from the Chancellor, and if he does manage to establish a strong working relationship with the Police (which recent Conservative ministers seem to have squandered) then he could go some way to moving the Conservatives back onto what was once very strong political ground for them – law and order. The Conservative Party membership would notice that. And so would the voting public.