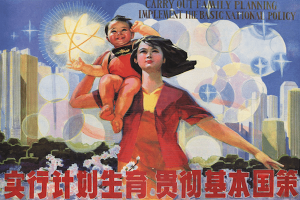 The One Child Policy achieved its main goal; to reduce the growth rate of the population; it has prevented between 250 and 300 million births and has meant that today China’s population sits at around 1.35 billion people. The policy has helped China to avoid food shortages, further the emancipation of women, and allowed the economy to prosper.

However, although the policy has reached its objective it has come with a cost, there is now a significant gender imbalance in China and if things continue at this rate one-fifth of the male population under 30 by 2050 will be without a bride. Due to the complete shift in the demographics of the population, there is a complete inversion in the population pyramid for China on the horizon as birth rates continue at their low rates, 1.3 children per woman, due to two generations of this being the norm. The policy has also contributed to a rise in impoverished conditions and depression among the elderly who are not supported as they have to rely on one child to provide for six dependents.

The government now clearly believe the negatives outweigh the benefits of the policy as they relaxed the policy late last year. The goal of a reduced population was reached but it could have been achieved in a different way, such as with voluntary policies. An example of this is mostly voluntary “late, long, few”  which called for later childbearing, greater spacing between children, and fewer children, had already resulted in a halving of the total fertility rate, from 5.9 to 2.9, in the years running up to the policy.

Although this problem is not native to Asia it is especially prevalent among countries in Asia such as Korea, Singapore, and China. With the serious consequences discussed above, it is possible that it is time for the world to move on from the authoritarian population control policies employed by China and view the bigger picture. Currently, this picture is not easy to solve as slower population growth presents less strain on the environment and food production but greater pressure on institutions responsible for caring for this aging population and far greater pressure on those expected to foot the bill for this new, ever-growing, demographic. The debate regarding the course of action needed will undoubtedly present hotly contested discussions between politicians, economists, and environmentalists for many years to come.