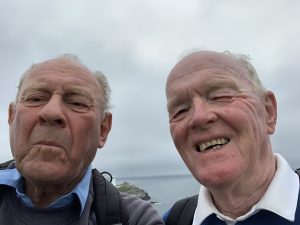 On the 7th and 8th of August Nick was joined again by OC Peter Wylie-Harris. Peter walked with Nick and Vickie Ingle in May on the path either side of Tintagel. By his own admission Peter is “even older than Nick” but the pair chewed up the approximately 20 miles between Perranporth and Godrevy. At the end of day one Nick reported that “PWH’s legs gave out on him” and on day two that “Harry is very exhausted”. In a subsequent conversation Peter says both are a gross exaggeration! Hats off to them both.