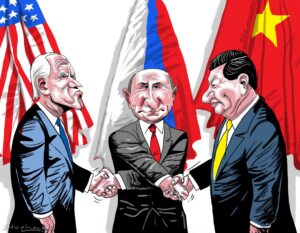 In the current global stage, it would be myopic to assume that global polarity is not in a multipolar state. Naturally, one would assume that, according to precedent, a multipolar system being present in the globe today suggests that we are heading towards a multi-state war emphasised by conflicting security dilemmas and state interests. But, this is not the case. Although hypotheticals are irreverent to logical and precise thought, a fair assumption, demonstrated by recent events and political occurrences, would be that we are witnessing the rise and fall of the global superpowers in a multipolar system. This means that we could be heading towards a unipolar system with one global hegemon, or a bipolar system creating stability or tension, but the more logical conclusion is that, in reality, the global system is changing, but not in terms of the value of polarity (i.e. uni / multipolarity), but the countries which denote this value are changing.

In the last decade, it is fair to state that the US has been in a form of decline in some areas and, as a result of this, has begun to aggressively consolidate its areas of power. This behaviour was predicted and explained by the cyclical nature of global hegemony, which states that when hegemons are challenged and are in a perceived state of decline, they act more irrationally and aggressively in order to assert their power, attempting to reaffirm their global dominance. This was demonstrated through the US GWOT, as well as perceived interventions and influences throughout the Middle East, which shows that the US is desperate to consolidate power.

However, although this implicates the US in a decline in global power, they do retain strengths which clearly paint them as the global power. They retain the largest military spending rate and economy, are a member of the P5 on the UNSC and their cultural influence can be felt worldwide. So, we can safely assume that the US is still a global superpower, but one that is in decline.

When one superpower falls into decline, another races to take its place. Currently, the country fulfilling this prophecy is China. China has demonstrated its power and influence at an increasingly prevalent rate in recent years, and it would be counterintuitive to not include them as a superpower. Their economy is predicted to overtake the US in 2027, they have the world’s largest army in terms of foot soldiers and have become the world’s largest manufacturing base, which cannot be discounted as a significant factor in today’s consumerist global culture. It also must not be forgotten that China retains the world’s largest regional influence, not just through their belt and road initiatives but through their dominance of the Asian economic institution.

However, China lacks in terms of its global cultural influence as well as its international popularity. China’s human rights records are questionable at best and its culture seems to have failed to spread further than food and Chinese lunar years. But, it is completely nonsensical to ignore the huge hard power influence which China possesses. So, we can clearly base China as a superpower, but one which lacks in soft power developments. This gives China a position where they can grow and develop as a superpower. In line with Chinese growth is the decline of the US, and it would not be abstract to state that China may replace the US as the top superpower in the coming decades.

Up to this point, it has been fairly difficult to argue against my proposed statements, given the power and influence of the US and China. However, Russia is often perceived differently. The undulating nature of Russia’s power, through both World Wars, the Cold War and the collapse of the USSR has made it hard to quantify a significant global influence from the slavic state, since their power changes so drastically from decade to decade. Because of this, and their current state, some would suggest that Russia is now a great power, instead of a superpower, due to its lack of economic power and its kleptocratic governmental system leaving domestic issues to fester, eating the country from the inside out.

However, whilst the world focuses on the rivalry between the US and China, Russia remains incredibly influential and could be classed as a superpower. In terms of economic dominance, many would dismiss Russia due to its reliance on natural gas prices. However, most of Europe is reliant on Russia for natural gas, and since the creation of Nord Stream 2 (A gas pipeline from Russia to Europe, through Ukraine), interesting developments have occurred which could present a solution to the Russian economic struggles. This all started with the invasion of Crimea, allowing Russia access to Sevastopol, (a warm water port) but more importantly further infringing on the sovereignty of Ukraine. Previously, Russian pipelines have been reliant on political stability within Ukraine for them to run, but NS2 bypasses this. Since Russia has control over Crimea and no longer requires the economic stability of Ukraine, it would be sensible to assume that they will attempt to gain control of Ukraine.

It is reported that Russia has amassed over 100000 troops on the Ukrainian border and is predicted to invade Ukraine in the New year. So, Russia holds huge regional influence in Crimea and control over President Lukashenko in Belarus, but this regional influence is beginning to impact their economic power, as it empowers their gas pipelines which are their main economic source of income. Therefore, economically, Russia is moving towards a state of economic regional dominance. On the other aspect of hard power, Russia has an enormous land army (not as big as the US) as well as having nuclear weapons. They are also a member of the P5 in the UNSC.

To describe Russia as in a state of growth or decline is difficult, considering that in many areas they would be considered to be in great decline. But, in other areas, they grow from strength to strength. They destabilize Europe, increase their monopoly on gas economies and have a huge military strength. In essence, one could call Russia a rogue superpower in the global stage, introducing another variable into the complicated global mix.

If Russia, the US and China are all superpowers and interact in the way that they currently do, some would assess the situation to be one which is clearly moving towards a third World War, due to the precedents which were set in the antebellum periods of multipolarity in the 20th century. However, the development of nuclear weapons and global political discourse means that, in reality, global war is unlikely. It seems as if the idea of superpower warfare has gone out of fashion and instead there is the cyclical undulation of power. This is demonstrated by the decline of the US, rise of China and rogue influence of Russia. Since there is an undulation of power, this clearly demonstrates how the globe is in a state of multipolarity, which can change and alter who has the balance of power, but there will always be more than two global powers in the current state of relations.