Skip to content
Cranleigh School Blogs / Politics Department Blog / Uncategorized / Why are the Eastern Powers able to get away with blatant crimes against humanity? 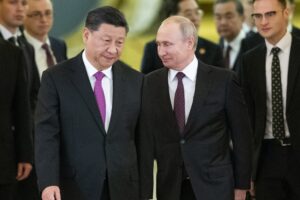 The Uighur Muslim sterilisation, forced re-education camps and murders. The Novichok poisonings on British soil. The blatant invasion of sovereign states in the Black Sea. The act of supporting cruel and oppressive dictators and corruption. These clear egregious breaches of international law and basic human rights have been committed multiple times by Russia and China in recent years. It’s no secret, all these stories have been covered in mainstream media, Russia’s annexation of Ukraine, China’s prelude to a possible annexation of Hong Kong, Alexei Navalny’s poisoning and imprisonment. Yet there have been no moves made by the West to stop this.

In July 2020 the BBC interviewed the Chinese Ambassador to the United Kingdom Liu Xiaoming, over the clear footage of Uighur Muslims being held by armed guards. He simply replied “you have a transfer of prisoners in any country” and denied the abuse of Uighur Muslims.

In March 2014, Russian militants in Ukraine shot down flight MH17 killing 298 passengers, 80 of whom were children. It was confirmed these militants were Russian servicemen who had been transferred to the Donbas region of Ukraine from Russian soil. Yet Russia denied all involvement in the region, yet again the west took no action even when evidence was provided that the missile used was transferred from Russia on the day of the crash.

Russia has supported the cruel repressive dictatorships of Alexander Lukashenko in Belarus and Bashar al-Assad in Syria for years through many breaches of international law, such as the use of chemical weapons to disperse protestors. The UN has a clause of stopping dictatorships globally, yet have not intervened.

Russia have poisoned Sergei Skripal and his daughter Yuliya with a chemical agent on British soil which then killed a British national and severely compromised 5 more in Salisbury in March 2018. We even identified the perpetrators as members of the Russian military. The only action that has been taken is to attempt to detain and extradite them if they set foot outside of Russia.

The lack of response clearly shows the weakness of the USA, NATO and western powers in general. I am certain that had the USA practiced similar tactics in countries allied to Russia or China, then there would have been a direct retaliation. This weakness has led to the West become the laughing stock of the East. The President of Belarus, Alexander Lukashenko, told us to choke on our sanctions as we are American Lapdogs. The lack of any response opens the door to similar actions happening again and again.

The Western powers must make a stand. No longer can the USA, Britain, France and the EU sit on the side-lines while Russia create proxy-wars to expand a second eastern Bloc. No longer can we sit on the side-lines while China imprisons thousands of innocent citizens without trial. We should remember the message used by freed captives of the Buchenwald concentration camp in 1945. “Never again”.