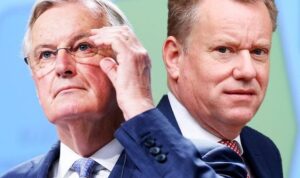 It was quite marvellous to see Parliament back front and centre of the news last night with the 2nd reading of the Internal Markets Bill giving Boris Johnson’s majority its first real test since his election win last December. The Bill passed its 2nd reading by 340 votes to 263, as Johnson saw off a mini-rebellion which included a number of former Cabinet members including: Sajid Javid, Jeremy Wright, Andrew Mitchell and Geoffrey Cox. However there are still more battles to come before the Bill reaches the statute book, with the House of Lords posing the biggest threat to its passing at this stage. A fantastic summary of the controversies surrounding the bill can be read here.

The main controversy surrounding the bill is the fact that it will directly break international law, in the form of the Withdrawal Agreement signed between Britain and the EU back in January this year. The government have indeed admitted this, with Northern Ireland Secretary Brandon Lewis stating in the Commons this week that it will break international law in a “limited and specific way”. This has led to a swathe of former Ministers, Prime Ministers and Conservative Party Leaders to come out against the Bill, claiming that it will essentially make the UK no different from other nations that regularly flaunt international law (such as Iran, China, North Korea) and will lead to a lack of trust in the UK, which will likely stymie any potential trade agreements that the UK desperately needs to sign after the end of the transition period of EU membership.

From the perspective of a liberal, the UK is entering very dangerous waters by taking this approach. Whilst they may appreciate that in leaving the EU the UK is trying to prepare itself for life in a more anarchic international system, a liberal would argue that the best way for the UK to do this would be to co-operate with the EU as much as possible in order to get the best possible outcome for the future. Morality is also a key tenet of liberalism in international relations, and in this case, the UK should have a moral duty to respect and uphold the terms of the withdrawal agreement that they signed with the EU in January 2020. In addition, the UK is delicately entwined with the EU through its trade relations, which liberals would highlight as being in a position of ‘complex interdependence’. By breaking international law, this will clearly put the relationship under threat and unnecessarily increase the threat of some kind of conflict (most likely a trade war) between the two parties that could be easily avoided.

On the other hand a Realist would firmly back the stance of the UK government in this debate and fully support the right of Parliament to legislate against any potential threats to the state by an international opponent, given that there is no higher law than domestic state law. Realists would have likely been against the UK’s membership of the EU in the first place, given that they believe there is no supranational authority that can enforce a global rule of law. The government claim that the Internal Markets Bill is necessary as a ‘backstop’ in case trade talks break down, given the supposed threat by the EU to potentially withdraw 3rd party status to the UK which may mean goods would not be able to be moved from Britain to Northern Ireland in the event of a no-deal situation. A realist would interpret this as protecting a national interest and seeking to re-address the balance of power (in trade terms) between the UK and the EU, which would likely precipitate a trading security dilemma if things get ugly between the two sides if a deal is not reached. A realist would not object to cooperation, and would actively support it if it was in the national interest of the UK to do so. However given the level of uncertainty that has emerged from the UK-EU trade negotiations and high likelihood of a no-deal, a realist would fully support any efforts from the UK to sure up their security as much as possible as they do not know for sure what they future intentions of the EU will be.

It is highly likely that the measures in the Internal Markets Bill will never make it into law. In the final stages of trade negotiations, both parties will push each other to the brink and try to extract as many concessions as possible. Ultimately both sides will need to come away with a compromise, but be able to sell this to their own citizens as a ‘win’. The EU needs to show to its other members that it is far better to remain in the Union, whereas the UK needs to justify to both Brexit voters and remainers that leaving the Union was the right thing to do. The prospects for this look bleak at the moment, but history tells us that sometimes important negotiations need to go right down to the final hour in order to achieve a breakthrough. The next few months are going to be very interesting indeed.