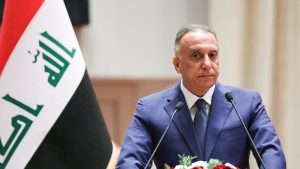 Ever since the oil price trade war between Saudi Arabia and Russia began in March 2020, Iraq’s financial situation has taken a nose-dive. Iraq’s treasury, of which is almost empty, is made up of 90% oil revenue. Despite this, the government is the country’s 1 largest employer of workers, meaning that wages seem likely to be left unpaid in the near-future without fiscal relief, cutting of wages which we have already seen with the abolition of pensions for those who receive two for mistreatment and exile during the Saddam Hussein-era, or even employee dismissals, which would exacerbate the already growing unemployment situation further with 25% of Iraq’s youth now unemployed, double the national average and an increase from 16.52% in 2019. The 23 initial response of the Iraqi government was internal borrowing from local banks, however, with the coronavirus pandemic taking its toll on businesses with nationwide lockdown, Iraq needs to find a way to resolve the ongoing financial crisis. It is currently seeking a loan of a maximum of $5 billion from the IMF, of which the US holds a 17.45% quota and 16.51% vote share, the largest of its members.

Yet Prime Minister Mustafa al-Kadhimi’s latest solution is to seek loans from both Saudi Arabia and the US, among which there are many strings attached. According to Oil Price analysis, the conditions to be met are a major reduction in oil production to meet OPEC+ cuts, which Iraq appears to be gearing up for with a successful reduction of 9% in June, however more importantly, “geopolitical benefits that Saudi Arabia and US expect in return.” This is significant as if “Iraq fails to comply- the entire OPEC+ deal 4 may crumble” which would likely crash oil prices once again, and be a fatal hit to economies globally, namely Saudi Arabia and America. They would not allow this to happen as failure to comply would result in a loss of multi-billions of dollars as analysed by Oil Price, so the likelihood is that they would give Iraq the necessary loans with no additional conditions, but they are exploiting the weaknesses of Mustafa al-Kadhimi, who is perceived by many to be an American agent. This is suggested by a source who 5 told S&P Global Platts, “There is an unusual level of near desperation by [Saudi Arabia] to raise prices. The role of the US cannot be excluded, either.” More specifically, these 6 additional prerequisites are large-scale investments into Iraqi oil and gas projects, and even solar power projects.

On Tuesday night, Ali Allawi, the acting Finance Minister, stated that Saudi Arabia has great interest in Iraq’s gas projects, while al-Kadhimi and his government has suggested that they should invest in Akkas gas field in the west or Mansuriya in the east. Allawi further highlighted that “Saudi Arabia has a high 7 readiness to back our energy projects. At the end of the day, they will pick one field. They are also interested in solar energy.” The prospect of this becoming reality is very 8 high as Saudi Arabia has already offered a $500 million loan behind closed doors shortly after al-Kadhimi came into power in early May.

What is so significant about these loans? Saudi Arabia is already eying up total domination in oil and gas, as last week, their Energy Minister Prince Abdulaziz claimed that the Kingdom will be the world’s biggest hydrocarbon producer “even” in 2050, adding they “will be the last and biggest producer of hydrocarbons.” The fact that they want to expand their investment influence into Iraq, demonstrates their desire to control Iraq’s largest revenue resource and even take control of the future projects of solar power, which, instead of providing both huge sums of money and power for Iraq and its people, that money would be directed straight into the pockets of the Saudi regime, the same government which helped create ISIS without repercussions, killing thousands of innocent Iraqi civilians, and the same government which has created the world’s largest humanitarian crisis in over a century in Yemen, as stated by the United Nations.

The long term revenue equating to hundreds of billions of dollars would be lost to Saudi Arabia for short term cash of low sums, the same as can be said for the US who desire to maintain a foothold in Iraq, this time economically as their military assertion was voted against by the Parliament earlier this year. And if Iraq ever wanted to re-nationalise such resources, the outcome would likely be the same as what happened to Iran under Prime Minister Mohammad Mossadegh in 1953, with the invasion of Iran by the UK and US as they wanted to control their own internal oil facilities; Mustafa al-Kadhimi is essentially voluntarily tying Iraq’s hands behind its back, giving away huge swathes of sovereignty and its most important resources for the sake of staying nominally in power, instead of pursuing the estimated $450 billion of disappeared public funds since 2004 from rampant corruption. This cannot be allowed to happen, for the 12 sake of the Iraqi people and its future generations.