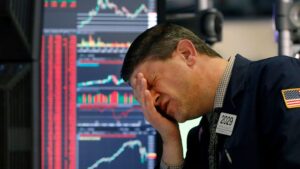 Amid this time of crisis, much talk of the winners and losers of this situation is simply speculation. However, there are obvious winners and losers that have already emerged. Economically, the situation is polarised, regarding the effect on industries. Quite understandably, retail, sport and leisure industries have really struggled as, through multiple sports personnel taking up to 80% pay cuts – as done in the Australian NRL. Also, regarding the virus’ effect on industries some clear winners have emerged, such as online shops and delivery services. Also, more long-term effects may favour certain industries over another, as there may be a general movement towards more electronic services and consumption, as demonstrated by a record number of people joining online banking in the UK and this may be the final nail in the coffin for the British High street.

Regarding the economic effect on a global level, the situation is pretty ominous for all, as multiple countries that have been forced to effectively freeze their economy, as a collective, are economically interdependent with pretty much all key economic state actors. This could mean that, due to macroeconomic fragility, if one key actor falls, so could the rest – just like dominoes. A key economic actor falling to the coronavirus, does not seem too unlikely as – Argentina, has effectively entered another sovereign debt crisis and Japan just injected a care package worth $1 trillion into the Japanese economy, yet already has the worst debt to GDP ratio in the world.

This brings me onto my next point that, as a consequence of the virus, there has been an increase in the use of Keynesian economic theory and intervention. The only state to refute increased intervention to protect the lives of the vulnerable have been Sweden, who have been typically difficult and liberal in their approach, yet seem to not have the issues faced by the liberal democracies and have a relatively low infection rate. Some are suggesting that the increase in the state’s role in society may be long lasting and that the virus may have a similar effect to that of WW2, where many national reforms occurred – increasing the state’s role, following the horrors of WW2, such as the National Health Service. It also, may lead to liberal democracies into more socialist thought, as the idea of collectivism and community has been at the heart of the message constantly reiterated by the state. This has led to people buying shopping for the vulnerable and clapping for the NHS on a Thursday. Therefore, I would not be surprised to see an increase in more Social Democracy or One Nation Conservative thinking.

Finally, surrounding the Global Political effect of the virus, there is much to speculate. Essentially, the handling of this global issue could propel an already existing superpower into the position of a global hegemon and could propel a power into superpower status. Regarding a superpower becoming a hegemon, this is largely a battle between China and the US. China have been blamed for starting the virus which has been deemed as harmful to their ‘campaign’, yet one could also argue that it demonstrates the global reliance on China and the global reach that they have, considering that this “Chinese Virus” as referred to by US president Trump has led some of the world’s most powerful economies to face turmoil.

China could become a real ‘winner’ out of this situation if it is the first to get its economy running smoothly again – strengthening its grip on global good exports, it could also increase its economy through increasing its holding of global currency and government bonds, increasing its ability to once again cripple the global economy. Aside from China increasing its economic power it could also increase its cultural/political power, if it ‘leads the charge’ against the virus and takes the role of aiding other countries through research and loans.

The EU, alongside China, also has a lot to play for as Greece and Italy, look to be on the cusp of another economic crisis. This could lead to these states leaving the EU, consequently triggered the collapse of the union, or staying the EU – greatening the institution’s debt and economic vulnerability, which could also lead to the collapse of the union; so, this is a situation that must be handled very carefully for the EU as there is little room for error, as already there is large scepticism about the union, from the likes of Hungary. There has also been increased division within the EU as a consequence of the coronavirus. For example, Austria, closed its borders with Italy early on in the process – which obviously violates the principle of free movement between the member states.

However, it is not all doom and gloom for IGO’s and global liberal institutions as, Covid 19 is an issue which crosses borders, encouraging global and collective response and initiative. This has been demonstrated through global fundraising events and through the WHO leading, at least in the early stages, data regarding the virus. On the other hand, in reality, there has not been much international cooperation, with states largely working of their own accord. This has been illuminated, regarding travel, UK expats and tourists have struggled to return home from the likes of Hong Kong/ China, who have issued a global travel ban, meaning leaving the state is very difficult, whereas in the UK borders have remained open for those seeking to return home. This illustrates the mismatch in approach to the virus.

Overall, regarding the winners and losers of the virus much still hangs in the balance. There have been clear winners, such as those in online delivery and there have been clear losers such as Airlines. Regarding states and ideologies, there is still much to play for yet, there are some who have more to lose and gain than others, such as China and the EU.