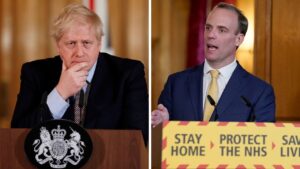 In response to the blog written earlier by Abbas, I firmly believe that the flexible constitution is working well and there is no need to codify it to determine who should take over as PM in a time of crisis.

Given that the Prime Minister is democratically elected, it is only right that another democratically elected MP can deputise or even take over as ‘care-taker’ PM. Therefore, it makes most sense that the sitting PM chooses from his cabinet his most trusted and similar member, in this case Dominic Raab is not far away from Boris’ views and is highly valued within his party, with strong leadership skills. Raab, Priti Patel, the new Chancellor Rishi Sunak or other senior ministers could take this position, however it is important to highlight what the position is.

I think the position should be a leadership role, however more based on direction that decision making, as the ‘care-taker PM’ lacks legitimacy it is only right that individual fields such as health, security and foreign affairs are handled and led by their appointed ministers. However, when it comes to a large yes or no decision the person held to take this must be the ‘caretaker PM’ as he or she has been given the authority by their incapacitated PM.

Overall the UK is not in need of constitutional reforms to fill this supposed void as clearly the government is functioning and able to make decisions, in addition in my opinion the laws and conventions already set out seem very sensible. However, at the same time it should be looked at in the future, as someone could exploit this via a legal loophole and subsequently gain a lot of power as a result, whilst much of the UK constitution is based on conventions and therefore manners and trust, it is clear that MP’s and senior ministers cannot be trusted fully, therefore in the future constitutional reform may be necessary to tighten up what is already there, this may involve making statute law out of the conventions used in the time of Coronavirus, for no other purpose apart from for security and the safety of the public.

To conclude, I believe that it is necessary, when a PM is incapacitated to up the decision-making ability of each senior minister when acting about its specific field, as they are the most experienced, but with the watch and direction of the ‘care-taker PM’