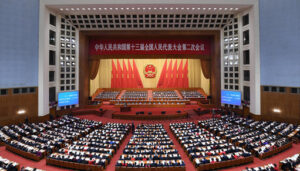 The Coronavirus epidemic may yet have contagious effects which trigger a more underlying threat to the status quo in China. This is because, since the 1980s, China has had at its heart a contradiction: the edifice of its one-party state legitimacy rests upon two greatly contrasting pillars.

One pillar is the doctrine of Maoism, essentially communism with peasant characteristics. This remains the underpinning of the Chinese Communist Party’s claim to power. The other pillar is the ever-greater material prosperity that has accompanied China’s switch to state directed capitalism and its entry into the global economy. Deng Xiaoping famously said of his market liberalising reforms: “It does not matter if a cat is black or white, provided that it catches mice.” Accordingly, the CCP turned its back on the utter economic and social failures of Maoism and embraced free market economics, with of course its concomitant social mobility and inequality. The hypocrisy, the divergence between word and deed, is glaring.

China’s leaders are as keenly aware as anyone that the delivery of economic well-being and material wealth only fulfils half of what humans need. The other half is the need for recognition, the need for a person to feel that their dignity is respected. It is this urge that explained the uprisings against state socialism in Eastern Europe and the USSR in the late 1980s, much more than the economic failures of those states. People protested at their infantilization by the regime as much as they did at the bread queues and the blackouts. Indeed, these states became vulnerable to such popular criticism partly because their populations were becoming sufficiently educated and materially comfortable to become aware that their rulers did not recognise their human dignity, did not allow them to participate in public and political life, and did not allow them the freedom to make their own moral choices.

It is this same urge for recognition that fired the protesters in Tienanmen Square in 1989. They were crushed, and the political settlement since imposed on China has remained in place ever since. But whilst capitalism may deliver what Chinese people demand materially, the communist system cannot deliver what they need morally. Its hypocrisy is one economic shock away from total exposure. Xi Xinping’s anti-corruption campaigns and cult of personality are an attempt to paper over the ideological cracks. The emerging “social credit” system – the use of data analytics and artificial intelligence to control the population – is the CCP’s pre-emptive repression. The sabre-rattling that sometimes features in Chinese foreign policy is its attempt to divert the people’s restless desires outwards.

The regime’s terror at the recent Hong Kong protests is hardly down to their scope, but to what they represent. They are a direct challenge to the notion that the Chinese are inherently different from the rest of the world because of their Confucian and Legalist traditions; in other words that political obedience and social stability are dearer to the heart of the Chinese people than meaningful individual freedom and dignity – the very dignity and freedom which Hong Kong’s liberal democracy has for decades conferred upon its Chinese citizens. The “One Country, Two Systems” arrangement for Hong Kong has within it the germ which may yet cause a political pandemic on the mainland. And the situation in Hong Kong is hitting China at its nodal link with the global economy.

If this Hong Kong crisis or other crises (perhaps a trade war with the USA, or perhaps the Coronavirus outbreak) mean that China’s growth miracle comes to an abrupt halt, then the emperor’s new clothes – the old clothes of Maoism – will be seen for what they are, namely nothing more than a moribund foundation myth justifying a corrupt and authoritarian hierarchy that has no right to dictate the fine details of every person’s life and moral choices. That could lead to “turmoil”, a rough translation of what any Chinese government most fears: the loss of state legitimacy and power, and a period of chronic crisis. Ultimately, the colour of the cat matters after all.