Skip to content
Cranleigh School Blogs / Politics Department Blog / UK Politics / The 2019 election will have a significant impact on how the UK is governed. 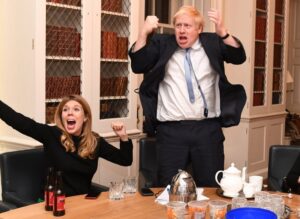 The Conservative party won the election with an 80 seat majority and gained 47 seats. They achieved 43.6% of the vote and it was the largest Conservative majority since Margaret Thatcher in 1987. The 2019 election without doubt was a historic election. It will have a major impact on how the UK is governed and there will be many changes ranging from devolution to the relationship/balance of power between government and parliament.

Though the Conservatives won in England, north of the border, Scotland now has a huge SNP majority as they managed to secure 48 seats and 45% of the vote. Scotland for many years have debated the idea of independence and the want for a second referendum. Due to the introduction of the Scotland Act in 1998, Scotland has devolved powers ranging from the establishment of a devolved parliament to tax varying powers. Now that Scotland has a huge SNP majority, who stand for the idea of independence, there will be more of a plea towards more devolved powers as they have the majority and a mandate from the electorate. This will also continue to raise the question of Scottish independence which will be a major issue for the new Tory government.

Another factor that will be affected the 2019 election is constitutional reforms. From 2017-19, there had been huge political gridlock as there was not a huge majority in both governments of the PMs at the time. The limitation that came with agreements, such as the Fixed Term Parliament Act, also increased tensions and created a stalemate. Now that there is a majority, the Conservative have the mandate to pass anything in their manifesto with little opposition from The Lords due to the Salisbury Convention. In order to prevent this gridlock from happening in future situations, there may be a change in constitutional regulations as the Fixed Term Parliament Act may be scrapped.

Undoubtedly, another factor that will be affected by the 2019 election is the Role of Select Committees. Due to agreements such as the Salisbury Convention and the huge majority that was received in this election, there will be little limitations or opposition in both houses. The Salisbury Convention ensures that manifesto promises can be passed. The huge majority deflects any opposition happening in the House of Commons. This will result in the lack of scrutiny in the Houses, which is one of their main roles. This means that Select Committees become extremely important as they hold the last proper part of the scrutiny role. Select Committees would have to hold Boris Johnson and his government to account on all matters.

Lastly, a factor that will have a huge impact on how the UK is governed is the way Prime Minister’s Questions will be set out. Usually the purpose of PMQs are to ask questions on issues that may affect people as well as holding the PM to account. In recent years, it has failed to do so as it has merely become a political showdown between opposing parties. Now that there is a government with a full majority, the bickering may come to an end. However, it was that same bickering that held the government to account. PMQs will only become worse and will be used to boast about the ‘great’ things that the government has done. It also becomes an excuse for set up questions from backbenchers which may enhance the reputation of the party. This just shows that PMQs are either used to bicker or to boast and will continue to lose its purpose.

To conclude, I believe that the 2019 election will have a huge impact on the way the UK is governed, as the huge majority will give the government far more liberty to act, decreasing political gridlock but also decreasing and lessening the purposes of certain things that have put in place to keep democracy running.