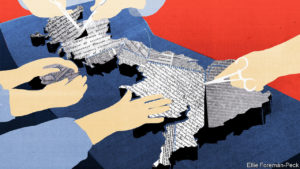 I read a book last year called How Democracies Die which was written by two American academics who had clearly been motivated to write it due to the rise of Trump in the USA. However, rather than being just another hatchet job on Trump, it was instead a very thoroughly researched study on the degradation of democracies ranging from Germany and Italy between the wars all the way through to the likes of Turkey and Venezuela in modern times. Clearly there was considerable focus on the United States however, where bitter partisanship and political brinkmanship have become the norm since the 1990s. Democracies degrade and die not just because of over-mighty executives, as you might expect liberal American commentators to conclude, but also through dysfunctional legislatures, politicised judges (and the tendency of parties to a political dispute constantly to resort to the courts), and polarisation and intolerance in public debate and the media.

And the recipe given for maintaining healthy democracy? Two core ingredients: tolerance and forbearance.

The first of these – tolerance – is clearly at a pretty low ebb in both Westminster and (perhaps to a lesser extent) in the country at large. I do not intend to cover this phenomenon here, suffice it to say that John Stuart Mill would be less than proud of some of the public discourse today in Britain.

And what a lack of tolerance leads to is a lack of forbearance. This is a term less familiar to many, but it basically means that those with power should exercise it with restraint, and that the spirit of the law should be seen as more important than its technical letter.

This forbearance, if properly exercised, should avoid reducing politics to its lowest common denominator. And forbearance is very important indeed in a constitution that functions through principles and conventions, rather than codified and entrenched rules.

In the current Brexit stand-off we see many political actors letting go this forbearance and using every trick in the book to gain partisan advantage. Yet though this advantage may be real, it is also temporary, whereas the damage it does may be long-lasting and even permanent. Here are some of the most egregious recent examples:

Irrespective of where you stand in party politics and over Brexit, this indicates just how seriously Bercow has, through his own lack of forbearance, undermined the impartiality of the Speaker’s role. We can now look forward to Speakers in the future being forced in by parties to carry out partisan agendas, rather than put in place by cross-bench agreement to conduct the business of the Commons even-handedly. This will degrade the integrity of Parliament as an institution.

Yet the current executive is the very opposite of strong. Now this law is being used by the opposition to keep a government in power that cannot govern whilst, in the words of one Labour MP, “hitting the government again and again”. In refusing to endorse an election, they are using a power that they have in a way that it was not intended to be used. They are actively undermining the government’s Brexit negotiations using the “Benn Act”. This stalemate would any time prior to 2011 have caused an election, and that is clearly what the country needs. Over-mighty executives may lead to “elective dictatorship”, but terminally enfeebled ones undermine the efficacy of our system just as much. Seen in this light, the abuse of the Fixed Term Parliament Act as a stick to beat a dead government becomes a major concern.

Lady Hale’s spider broach attracted a lot of attention. In future, focus is more likely to be on her political attitudes, and those of other justices, as more and more cases are brought to court by the likes of Gina Miller and perhaps Nigel Farage. Judicial neutrality will be brought into question. Parliamentary confirmation hearings for Supreme Court justices may be the corollary. Welcome to a politicised judiciary, and to the ever-increasing resort to the courts to settle matters that should remain in the political realm.

It will not be long before the legitimacy of any democratic mandate can be called into question on similar grounds. It will only be a short contagious leap from direct to indirect democracy for the validity of a general election victory to be questioned. The basic legitimacy of the government’s right to pass laws may be brought into question if they won majorities on whatever grounds the losers pick to complain of: unfair constituency boundaries, the voting system, the age franchise, the bias of the mainstream media, the falsehoods peddled on the manifesto. The test of democracy is that legitimacy is conceded even by the defeated. Our democracy in this crisis has failed that test, and that failure may yet spread further than the referendum result.

Of course, those who are so lacking in forbearance and tolerance believe that they are doing a good deed. In this Brexit debate, almost everyone is acting in what they sincerely believe to be the public interest, and therefore they think that the ends justify the means. They think they are right. But everyone thinks that they themselves are right.

The point of democracy is that such polarising disputes between different factions who believe themselves both to be absolutely right can be aired and resolved within the rules. The means are in fact more important than the ends.

Those on both sides of this Brexit argument who say that they are fighting for democracy, and yet who refuse to exercise toleration and forbearance in their words and their actions, are in fact undermining the democratic traditions and institutions they claim to be defending.