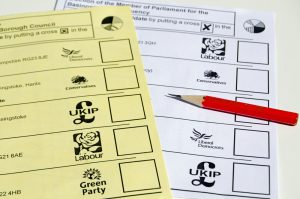 I believe that we should use First Past the Post in all UK elections. The first and most obvious reason why this voting system must be retained is because it is just so simple. The candidate with the most votes wins. This is clear and decisive, and does not waste any time with numbered preferences as the STV system does. With First Past the Post voters just cast a single vote by placing a cross next to their preferred candidate and the one with the largest number of votes in the constituency is elected. The simplicity and preferability of this becomes obvious when you examine some other voting systems. The Single Transferable Vote system is used in the UK for the Northern Ireland Assembly elections. This uses multi-member constituencies and voters number their choices preferentially. For a candidate to be elected, they need to achieve a quota and if a candidate does so on the first round then they are elected and their second preferences are redistributed. This is clearly a poor system compared to First Past the Post, as when you vote for a candidate you want them to win the seat, and second and third preferences shouldn’t matter and aren’t good enough, it makes ‘winners of losers and losers of winners’ as David Cameron said.

Furthermore, First Past the Post is excellent at providing strong and stable Government as there are rarely Hung Parliaments. It suits the British political system, which unlike other European Countries such as France, has always supported a House of Commons based mainly on two main parties. These up until 1924 had been the Conservatives and Liberals but since Ramsay MacDonald’s Government Labour has been the main rival of the Conservative party. First Past the Post provides the people with what they want as Tony Blair’s sweeping majority in the 1997 election shows. This makes the country more stable as there is often a clear majority, from which a strong Government with a clear mandate from the people can form.

First Past the post is also extremely cost-effective and can be counted easily. If we tried to introduce new voting systems they would be very expensive, both by their nature, and also the massive campaigns that would have to be funded to educate the public on how they work as they are just more complex and confusing then First Past the Post.

The final and most important reason why we should retain First Past the post is that there is no need to stop using it. The public are not calling for a change in the voting system, changes are mainly supported by the small parties who hope to gain more power by having a more proportional system, such as the Liberal Democrat’s. The apathy to this issue is clear when one looks at the result and participation of the 2011 Alternative Vote referendum. There was only a 42.2% turnout from the public, and 68% voted ‘No’ anyway. Clearly the public are not very interested in this issue, and the ones who are with to retain our present system anyway.

Clearly then, First Past the Post is the best voting system for our country. It is cheap, simple to use, supports our two-party system, and provides strong and stable government in line with what the people vote. I see no need to change it at all, and clearly nor do the people as the 2011 referendum clearly shows.