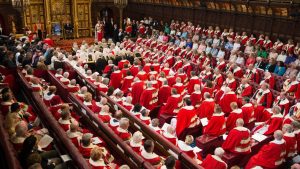 I noted a blog post recently (“Is Britain a Democracy” by JD in the LVI) about how the UK cannot be a democracy because one of its legislative chambers – the House of Lords – is not elected and, because democracy is all about electoral accountability, ipso facto the UK is not a democracy.

This argument is readily understandable. A democratic mandate is widely seen as crucial to confer legitimacy on governments and legislatures throughout the democratic world. Accountability is also vital. If legislators can be removed at the ballot box, then they are kept honest and the composition of the legislature can be refreshed every few years to reflect the changes taking place in society at large. Political breakthroughs can be achieved by the likes of UKIP and the SNP that are not achievable in the appointment system of the Lords. What with the ermine, the gilded baubles and the ongoing survival of a hereditary element, it is small wonder that those of a liberal bent see the with anger at the power wielded by what they see as an archaic institution.

Yet the plain fact that the Lords is not democratic is one of its main strengths. In order to understand the great advantages conferred upon the British constitution by the upper house, we must return to our very first analyses of power and authority. The Lords may not have the authority of a popular mandate, but they have the very powerful authority of expertise, wisdom and experience. Pretty much nobody gets appointed to the House of Lords without a distinguished career behind them, whereas in elected upper houses the world over, any rabble rouser can get the job. The appointment system also tones down the political partisanship so evident in, say, the US Senate. Cross-bench peers hold the balance of power in any Lords vote, and in any case the system of appointment for life (which by the way is transparent and politically even-handed) means that party whips in the Lords are far weaker. This allows for proper deliberation in the public interest.

The power of the Lords also needs examination. It is powerful as a revising and scrutinising chamber, but the conventions of the British constitution mean that this power cannot veto the democratically elected Commons. For sure, it can delay and sometimes effectively kill bills, but it is restrained in this practice by its own convention of institutional forbearance. I struggle to think of a bill that was blocked by the Lords without very good reasons. Its better function is as a revising chamber in the broad public interest, which can take the sharp edges off laws enacted by partisan political agendas in the Commons. Were we to elect the upper house, we would end up with a chamber boasting rival mandate to the commons, and this would be likely to result in legislative stand-offs and gridlock. Those who airily claim that an elected upper house would remain subordinate to the Commons misunderstand the British constitution. It functions very largely by convention, and elected peers would quickly establish a new convention that they could indeed block and veto any bill, including budgets. All that nice Salisbury Convention stuff would quickly go out of the window once Alan Sugar et al wave a democratic mandate in your face.

Our crisis of democracy, which perhaps has its roots in an unholy compound of social media and financial crisis fallout, does need addressing. But more democracy is not the answer. The polarisation, the shrill partisanship, the ravings of the twittersphere, the populism and extremism – these things would not be solved by an elected upper house. They would be severely aggravated by it. Far better is an expert appointed chamber, acting in a manner analogous to a non-executive board of directors, or a council of elders. The appointed House of Lords is a reality check and a storm anchor for the British legislative process. The last thing I want to see is its replacement with tub-thumping populists acting for “The People”.