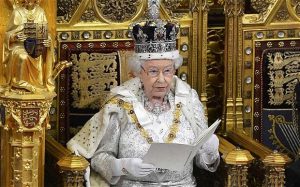 What does the Queen actually do? She attends myriad public engagements throughout the UK, the Commonwealth and the world, for sure, but what is her political role? We are told that the monarch wields no actual political power at all. A-Level textbooks are very clear on this, offering only throw-away one-liners emphasising the near irrelevance of the Crown. And in terms of day-to-day executive power, they are right.

Yet this is a distinctly liberal view, and it is misguided. Of course, politics textbooks are written by liberals, because it is liberals who are at the core of the educational establishment. Moreover it is liberals more broadly who insist on engaging in debates about non-issues like whether or not the UK ought to have a codified constitution, when nobody in the real world – from the high street to Downing Street – even stops to think about such unnecessary abstractions. The thing is that liberals are rational, and therefore they assess our politics and our constitution on the grounds of rational measures. Constitutions are machines with inputs and outputs. By these standards, the monarch has little or no use.

And because liberals are rational, they also believe that authority arises rationally, and this is at the root of their mistake as regards the monarchy. It is the legal-rational basis of authority and legitimacy that liberals champion, while they seek to ignore or downplay the traditional forms of authority that have existed for millennia in human politics. They mistakenly overlook the irrational in human nature: the need for tribe, for nation, for loyalty. For them, government is by rational social contract alone. They seek pointedly to ignore or undermine any political institution that does not fit the rational framework they advocate for the organisation of society and the polity.

Yet the fact is that traditional authority cannot be done away with any more than the family can be. It is organic. Even in self-professed republics such as the USA or France, which may take pride in the rational basis of state legitimacy, the pomp and circumstance surrounding the presidency indicates that traditional authority still has its place. It will always exist alongside legal-rational, democratic authority in any nation-state; indeed it must do so if that term – nation-state – is to make any sense at all.

But now a liberal would argue that, of course, presidential systems confer a democratic mandate on their head of state which can never be matched by the hereditary principle of monarchy, and hence can justly confer executive powers on a president. When we look at a republic, we are looking the social contract incarnate, not at a moribund, neo-feudal institution like the Crown. This, they may say, is why presidents wield executive powers where constitutional monarchs do not, and why monarchies are outdated, useless and illegitimate. Monarchies are an irrational anachronism that should be done away with, they argue, without any appreciation that an institution which has stood the test of time may possess a political purpose that the liberal rational analysis cannot perceive.

And that purpose is this: the power of the monarch is not measured by the executive legal-rational power that she wields (which has been practically none for centuries) but by the symbolic traditional power that she denies to others. No British Prime Minister can establish his or herself as some sort of figure above politics, some sort of “father of the nation” like Charles de Gaulle, a personal embodiment of the state. Not even Thatcher or Blair with their whopping parliamentary majorities and powerful ideologies could attempt this. They were always answerable to the non-executive chairman of the board, the Queen, who herself had no popular mandate or constitutional right to executive powers. Thus no single person in Britain can lay claim to both the legal-rational and the traditional sources of authority. This is denied to them, be they PM or Queen. Seen this way, constitutional monarchy provides for an authentically liberal separation of powers.

Not only this, but constitutional monarchy stabilises the body politic through the heritability of its status. No single faction or special interest can lay claim to the position of head-of-state other than by marriage – and I can’t see Prince William divorcing his wife and marrying Dawn Butler or Penny Mordaunt any time soon! Traditional authority over the state and the nation are thus not up for grabs by some one-off vote. The nation cannot be symbolised by a strutting megalomaniac waving a populist mandate, abusing his or her powers of office for partisan ends in the name of “The People”.

And if a British prime minister did attempt this, it is not inconceivable that the dormant power of Crown veto on legislation might even be awoken, or at least active political leadership by the Crown might somehow be temporarily asserted in a serious crisis, as a sort of constitutional critical injury insurance. Thus the monarchy is the storm anchor of a nation, and the safety fuse in the constitutional circuit. It prevents overloads of power, provides a locus of authority, and may provide the crucial back-stop should any major constitutional crisis arise. You don’t know you need it, until you need it and it’s not there.

For these reasons it is not a coincidence that constitutional monarchies are generally more stable and long-lived than their presidential counterparts, and that democratic freedoms and the rule of law are safer in those countries that possess them such as the UK, the Scandinavian states, and the Netherlands. It is generally in systems with strong presidencies such as Turkey that democracy comes under threat.

We would do well to remember the Spanish experience. Upon the death of the nationalist dictator Francisco Franco in the late 1970s, Spain negotiated a delicate and coup-prone transition to pluralist democracy. This was a society that within living memory had undergone (following the removal of its king) a brutal civil war and a repressive dictatorship. It still had open wounds, potentially partisan armed forces, and divisive nationalisms. Yet make the transition to democratic stability Spain indeed did. And what was at the centrepiece of that transition? What was the beacon of stability offered by the national unity government of Adolfo Suarez? Answer: the restoration of the constitutional monarchy under King Juan Carlos I.

So hear this, you liberal republicans: you don’t know what you’ve got ‘til it’s gone! (Or whatever that is in Spanish).