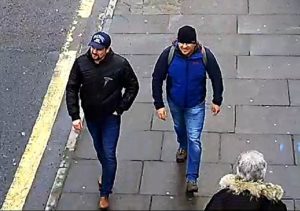 I have always wanted to write a novel. Apparently everyone has at least ‘one good’ book in them. Over the years though, I have slowly started to review my expectations. I firstly downgraded to a comic. Then a sitcom. Finally I settled on what I could actually achieve if I put my mind to it! A pantomime! Not even a big regional theatre one, just a local, village green panto. After struggling with writers block, inspiration finally came to me following international events this week. I can now get to work on my masterpiece – ‘Carry on up the Moskva’.

The panto starts with two ordinary Russian chaps, let’s call them Alexander and Ruslan, who are both passionate church spire spotters. Having tired of the marvels of St Basil’s Cathedral in Red Square and the Cathedral of the Annunciation in the Kremlin, they meet up with some other ‘enthusiasts’ in a vodka bar, who tell them of a mystical, marvellous place. The Holy Grail in the ‘church spotters’ eyes. A place with a 123 meter spire, excellent parking facilities and 10% off in the gift shop with National Trust membership. Alexander and Ruslan are in awe. They simply must make their pilgrimage to the most incredible place on the surface of the Planet……Salisbury.

They board their Aeroflot flight in Moscow, after having stopped to pick up some supplies from duty free. Alexander remembers that it is his girlfriend’s birthday next week, so purchases a small bottle of Nina Ricci perfume on arrival at Gatwick airport. They land in London, spending the night in a hotel as close as they can to Victoria station in order to get down to Salisbury at first light. They decide that evening that this is going to be such an incredible, ground-breaking life event for them that they need to do a reconnaissance mission before their first trip.

Finally they day they have been waiting for arrives. They board the train and arrive at Salisbury station, tourist guide in hand. But to their horror, the infamous British winter has taken hold (in March!) and there is a light smattering of sleet and rain hitting the streets. Concerned for their safety, they take an 8 mile detour around the suburbs of the town, but become lost and have to stop and ask directions. As fate would have it, a fellow Russian lives close by. They knock on his door, but he is not there! They suddenly remember that they have google maps on their phones, so find their route and make it to their destination. They are so caught up in the awe of the Cathedral spire and selection on novelty tea towels in the gift shop that they forget to take any photos to show their friends back home. They depart on the train back to London, still mesmerised by the glimpse of heaven that is Salisbury, and fly back to Moscow eager to tell all of their friends about the trip. Unfortunately on the plane, Alexander remembers that he accidentally dropped the bottle of perfume in a park after they got lost in the morning!

The next week they find out that they have become suspects in an international assassination attempt! Yes those evil British propaganda merchants have claimed that they were responsible for planting Novichok nerve agent on the door of a former Soviet spy in an attempt to kill him! Cue hilarity, mistaken identity, a horse, a dame, a few songs and everyone laughing it off and living happily ever after!

Highlights will include the former Soviet spy, Mr Skripal, walking on stage and asking the audience where his career as a clandestine double agent for MI6 is. They all yell ‘behind you’ with much gusto. In addition, a good fifteen minutes will see Alexander and Ruslan in an interview on a state sponsored TV channel saying that they did not spray the Novichok nerve agent on Mr Skripal’s door, to which the audience will reply ‘OH YES YOU DID’ with great hilarity. The final scene features the good old panto sing a long song, ‘1 finger one thumb’ but with slightly altered lyrics – ‘1 bottle, 1 door, 1 spay, 1 touch, your arms and your legs stop moving’!

“Carry on up the Moskva” is set to take the village panto world by storm this Christmas. Make sure you book your tickets in advance!!