Skip to content
Cranleigh School Blogs / Politics Department Blog / Global Politics / The Syrian Refugee Crisis. Is there a way out for Europe? 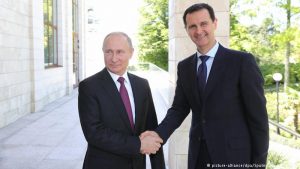 Last month, Vladimir Putin and Angela Merkel met in Germany to discuss the future of the Syrian conflict, most importantly how to resolve the ever growing refugee crisis that Europe is experiencing right now. Putin proposed that Germany, along with other European countries, provided President Assad financial aid (collectively $388bn) in order to rebuild and redevelop the flattened country that is Syria. In return, the Syrian government will remove the humanitarian burden from European powers.

Since the beginning of the conflict in 2011, over 6.1m civilians have fled their homes, with 5.6m moving abroad. A considerable proportion of these refugees have sought refuge within many European countries, most notable Germany and France. Germany has accepted hundreds of thousands of refugees since 2015 – the height of the migration crisis – which has weakened Angela Merkel politically and split the European Union. It is therefore understandable that Merkel seeks to resolve this humanitarian issue sooner rather than later.

Clearly, there is a deep rooted socio-political debate here. European nations can either provide economic to a nation accused of using chemical weapons against their own civilians (Syria), or continue to feel the excessive burden (both politically and socially) of the ever growing refugee crisis. Evidently, there is an argument for both sides. There is no guarantee that humanitarian standards will be met if Syrian nations return home. However whether or not their standard of living is at a satisfactory level within the numerous refugee camps is a different discussion all together. I find the most viable argument against providing this enormous amount of financial aid to Syria is the European concern for both domestic and international results. Providing the funds to rebuild Syria, may help to further stabilise Assad’s fascist regime, which may compromise Syrian livelihood further. Not to mention the American response, with Europe subsequently undermining American military ambitions, the repercussions may be immense.

Overall European nations have a decision to make. Either they continue to carry the weight of the Syrian Refugee crisis on their shoulders or provided a considerable about of financial aid to a fascist dictator. Easy choice right?