Skip to content
Cranleigh School Blogs / Politics Department Blog / Global Politics / The world is in a state of bipolarity….for now 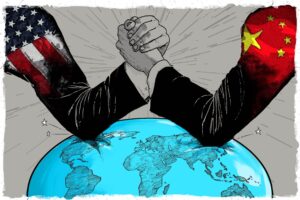 Could we justifiably suggest that the world still lives in a state of unipolarity? The hegemonic status of the US in 2021 has been challenged due to the interconnected nature of the Chinese economy on the global stage as well as the imperialism by stealth technique which the state has used to grow from an emerging economy into a superpower.

Some would argue however that the Sino threat is overrated because it does not match the US on every branch in the balance of power. The Chinese cultural authority is weak compared to the US. Americanisation has dominated the 21st century, with 8/10 of the most popular global brands being American. This soft power has created a hub of trade and foreign investment which the Chinese have failed to exploit in their own culture. However this does not make the US the dominator of the global system anymore as there are undeniable hard power challenges emerging from the east.

The Chinese military and missile count is the largest in the world. They have a global presence across the world with bases spreading across the peninsula and year on year increasing their spending by 10%; they therefore are in a position to compete with the US military presence. Furthermore, the Belt and Road Initiative has created an empire of wealth and relations for China. They can now match the US on regional power through the state formulating economic and political bonds with most of Asia and Africa; in which they are the biggest global investor in the world.

To ignore the rapid emergence of this state would be ignorant in the face of their international authority. Which has changed the system of economic globalisation to centre in the east rather than the west, achieved through low regulation schemes and without the implication of democracy; making them favourable to the Asian trading centre. As a consequence, the rise in their power has created considerable social issues in the international standards. They are renowned for a lack of suitable human rights laws, as seen with the persecution of the Uyghur Muslims and the implication of the Chinese Firewall which puts limitations on the freedom of speech. Furthermore, their fast paced industrial emergence has had a massive impact on global temperatures which have risen considerably in the last decade. Additionally, perhaps the most obvious result of their trade output has been the spread of Coronavirus which has brought the global market to a stop. As a result of the interconnected nature of their economy, avoiding the spread of disease is minimal if not impossible which raises questions over the morality of their dominative power.

On the other hand they have made great strides in social policy. In the last year we have seen President Xi make promises over carbon neutrality in the hope of combating the deteriorating environment which they are on track to achieve by 2060. They also, through the growth of their economy, have lifted many of their citizens out of poverty and have targeted unemployment in other countries through their infrastructure initiatives.  Can it therefore be suggested that they have taken over the role of the global policeman in 2021?

Trump with his isolationist policies has left a power vacuum internationally which the Chinese have filled. Having withdrawn from the Paris Agreement, not joined the ICC, criticised NATO and the UN, Trump has allowed for President Xi to take action. The Chinese politician has continuously made promises for collaboration and intervention for mutual benefits as seen in the Belt and Road, which the US have been fundamentally lacking. As a result, bipolarity has become a reality as China poses a threat to the US’s military, economy, structural and political power.

However, it would be ignorant to forget the silent but deadly rise of Russia in the hope for a multi polar system; continuously proving their global presence through cyber technology and military development. Although the state of global power may be bipolar for now, who’s to say that the Russian’s won’t make a comeback in the post pandemic state of affairs…..