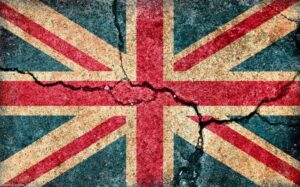 Contemporary Britain is a far cry from the glory days of the empire. Covering a quarter of the world’s landmass, and by far the richest and most powerful country in the world at the time, perhaps to ever exist, the empire was the envy of all empires in history. However, how is it that we’ve lost so much in so little time? Success in world wars and global domination was only as little as 90 years ago, a single lifetime ago. But now the borders of the once glorious country are confined to our own little island, and our global influence is greatly deteriorating. During the 1900s, economic power arose in Germany and the USA, from their ability to protect their own producers from international market prices, and to create a competitive advantage through tariffs. This was something the UK couldn’t keep up on, with its conservative, and hardly progressive ‘ideology’ of Free Trade. Since then, the empire was riddled with independence cries, and now, the once great British empire is a small and somewhat insignificant island.

However, imperialism is hardly prevalent nowadays, and so perhaps it is not a bad thing that we’ve lost it. Still a powerful country, Britain has nuclear weapons, which only 8 other countries are able to brag about. Although, since the end of World War 2, Russia and the USA have been out front in terms of domination and influence. Britain was left behind. And perhaps it may have been that victory in the wars was not possible without the help of America, and certainly not without the help of the USSR. Therefore, Britain was unable to win the war itself, and was maybe not as powerful as we made it out to be.

We have declared that the fall of the empire is a huge step towards the failing of Britain, but navigating today’s politics is another example as to why Britain is falling apart. There have just been too many mistakes. Brexit has caused the country significant problems, and Scottish nationalism is always a threat to what little we have. Having called for a Scottish independence referendum, and failing, Sturgeon used the excuse of 38% of the Scottish electorate voting to leave the EU, and claiming that Scotland was not being represented at Westminster. Scotland keeps pushing for independence, or more devolved power, and makes it clear that it does not want to be a part of the failing state of Britain. The UK was almost torn apart in the late 90s with republican and separatist factions violently terrorising the country behind the banner of the infamous IRA, but this was fortunately thwarted by the Good Friday Agreement of 1998. It appears that only England wants the UK to remain together, and with each time it flies itself back together, the glue becomes less and less effective. The UK is on the verge of collapse.

Internationally, the UK makes mistakes on foreign policy, such as their donating of nuclear submarines to Australia, in order to help protect them from China’s growing sphere of influence in the South East. This was a completely ludicrous idea, as it was in direct violation of the Nuclear Non-Proliferation Treaty of July 1968, and in terms of international relations, China is a powerful enemy. Our economy relies heavily on the input and production of China, and to annoy them could cause detrimental effects to our economy. The failed intervention of the Blairite government in the Iraq war was another example of poor foreign policy, with Britain spending its soldiers and money on a pointless war far away from our little island home. Internationally, Britain has lost its tenacity and domination, and domestically, the UK is tearing itself apart. With the rise of China, and the continued success of the USA, it is hard to see Britain ever return to its once glorious past, and it seems those days are far behind us.