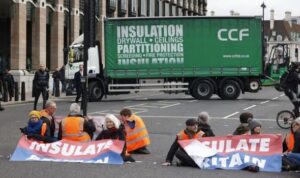 Insulate Britain has been the focus of headlines involving protests over the last few months. They have participated in what can only be described as extreme protesting. They have caused chaos and danger to the people of the UK.

Insulate Britain is a pressure group that has set out to get the government’s focus on insulating all social housing in the UK by 2025. Now at first you might think that’s a reasonable request, it’s logical and would help the people of the UK and could even get Boris Johnson in for another term due to the increase in voters who would turn to his campaign. But to insulate a single UK house costs around £20,000 in the most extreme cases. Now the UK has around 25 millions houses so the math comes to around £500,000,000,000. For this to happen taxes would have to be raised an extraordinary amount and we would have to take money out of poorly funded branches of the government, money that could be spent on healthcare, education and social work which is vital for the UK economy and society. This then begs the question: what are they doing it for?

The extreme lengths I mentioned beforehand are lengths in which groups such as these have gone to in the past and it can be summed up in one word, dangerous. Some activities these protesters have gone to are as follows;

The two most outrageous of the above is blocking ambulances and blocking the house of parliament. How can someone sit there and prevent a right in the UK (if a citizen) to free healthcare and for these people to sit there and stop what could be a life or death situation says a lot about the movement itself. The blocking of parliament is a clear sign of discontent for the government but also the act itself is stopping democracy from taking place which is the key to the UK constitution and to just block it is a very questionable act.

In conclusion I think that the idea behind the movement can be thought on by the government but not at the length the Insulate Britain wants it and that the message has been lost due to the mindless ways in which the members have chosen to protest. They have become a menace to society and their message has been almost fully lost.