Skip to content
Cranleigh School Blogs / Politics Department Blog / van Hasselt Award / “What effect will the Taliban’s return to power in Afghanistan have on the USA and the world? – Senior Winner 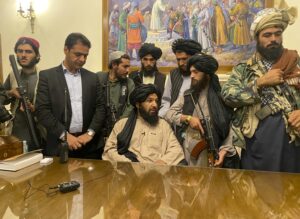 On the 30th of August 2021, the US officially completed its evacuation efforts from Afghanistan, effectively ending the two-decade conflict that was born as retaliation against the terrorist attacks on the World Trade Center. While the return of the Taliban was anticipated as a direct consequence of this withdrawal, the sudden and complete seizure of control was entirely unexpected and ultimately submerged the war-torn nation into mayhem, leaving thousands of Americans, allies and Afghans stranded. Closure of banks, protests, the Kabul airport chaos, and a rapid restriction of women’s rights were all part of a succession of drastic measures that unfolded following the Taliban’s abrupt return to power.

To this day, the US has been criticized for the mismanagement of its intervention in Afghanistan, which now extends to its hastily implemented exit, leaving behind the fragile (and arguably ill-conceived) democratic framework that relied on their presence for two decades. Following the US invasion, actions were taken to restructure Afghanistan into a modern state, based on democratic values and institutions, a proposal that completely ignored the cultures and history of Afghanistan and ultimately proved to be an impossible task.

Following the US’s 20-year involvement and continuous extensive investment in the region, their abrupt withdrawal from Afghanistan and the sudden dominance of the Taliban appears to be an overwhelming failure, one that compounds the disappointment of allies and encourages adversaries such as China to extend their influence on this region. In fact, George W. Bush’s promise on behalf of the US to wage and “win the war against terrorism”, one of the primary objectives of this conflict was not fulfilled. The failure to achieve the US’s objective in the war against terror undermines the US’s influence on the international stage, reinforcing the limits of American power. While many agree that “this is manifestly not Saigon” the event does draw some likeness to the US’ humiliating withdrawal from Vietnam and so, logically, may have similar, if less pronounced, consequences. Primarily, one can assume that the Republican party will exploit this failure to attempt to undermine President Biden and the Democrat party which may influence the 2024 election results.

A rise in anti-government and anti-liberal ideologies and the polarization of the population, as was seen in the 1970’s and more recently, could be exacerbated within the US as a result of Afghanistan, although this seems less likely currently considering the trends of increasing trust in the federal government by the population. Backlash will also be directed at the US’s aggressive foreign policy and, as a result, may drastically reduce military intervention abroad. This is corroborated by a statement issued from the White House declaring that the withdrawal marks the end of “an era of major military operations to remake other countries”. Additionally, the retreat from the US’s longest waged war will likely result in its footprint on the world stage receding as the nation once again turns inwards, possibly reintroducing semi-isolationist policies for a brief period. While it may appear that this will have negative connotations for the US, one must also realize that a burden has been lifted from the metaphorical shoulders of America. Daily, an average of $300 million was invested by the US government into the Afghanistan war, which instead can now be redirected to other domestic priorities, including improving living standards and rebuilding infrastructure within America.

According to various sources, “Afghanistan wasn’t just America’s 20-year war. It also belonged to US allies.” This statement is integral to understanding future relations between the US and its allies following the US withdrawal, especially in light of the minimal consultations with its coalition partners, essentially forcing approximately 7000 non-American NATO forces to evacuate. The situation clearly demonstrated the dependence of the UK and Europe on the US and has therefore reignited discussions on the restructuring of the transatlantic alliance. Essentially, the defining question is whether members of NATO will view the US as a less reliable partner and if so, what ramifications this may have upon future policies.

In conclusion, while the Taliban’s return to power in Afghanistan will massively impact countries in its geographical vicinity, including India and Pakistan, the associated failure of the US intervention in the region will, in the short term, be of greater importance to countries in the West. Recently, Afghanistan’s neighbors have attempted to adjust to the emerging Taliban regime, shifting their geopolitical perspectives as a result of the diminishing US presence in the region. Two primary responses have emerged due to this. Certain countries, primarily China, are attempting to take advantage of this situation by extending their own influence in Afghanistan and beyond. This is evident through their communications with the Taliban and the continuing operation of their embassy within the nation. However, the vast majority of countries, including Russia and India, view this development as a threat and are, as a result, taking precautionary measures to mitigate the return of instability and terrorism within the Middle East and South-Central Asia.