Skip to content
Cranleigh School Blogs / Politics Department Blog / van Hasselt Award / What effect will the Taliban’s return to power in Afghanistan have on the USA and the world? – Senior Runner Up 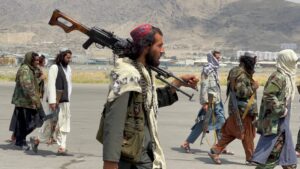 “The events we’re seeing now are sadly proof that no amount of military force would ever deliver a stable, united, secure Afghanistan, that is known in history as the graveyard of empires.” This was stated by President Biden on the 31st of August 2021, defending his decision to remove US influence and force within Afghanistan. However, this cogent verdict resulted in the rise of Taliban power, posing a threat to the globe. The ternary areas that could be impacted by the Taliban’s return of power are the relationships in the Western world and the Middle East.

The Taliban has clearly impacted the Western powers of the world by strategically affecting its foreign relations, challenging its global reputation as its values are the antithesis of the fundamental policies of ‘Westernisation’. This was evident in the strained relations between the US, UK, and NATO during the ‘planned’ evacuation from Afghanistan. A clear conflict in foreign policies and organisations can be seen through quotes such as “The Foreign Office has failed to openly acknowledge the reality of US exhaustion” – stated by the US Senior National Security Minister. Furthermore, criticism was levied towards President Biden by UK Labour leader Keir Starmer who stated that (Biden needs to) “recognise the wider consequences of the action that he’s taken”. This displays growing hostility between trans-Atlantic relations on topics related to the return of Taliban power.

In addition to tensions between Western nations, the Taliban’s growing power has placed a significant dent in Western ideologies. Policies and values such as Democracy, Liberalism and Rule of Law have been challenged recently due to these three principles failing to succeed in what is known as “the graveyard of empires” (Afghanistan). Evidence of this can be supported by the quote “Every terrorist around the world is cheering in Syria, in Yemen, in Africa. They’ve watched the Taliban… defeat America in effect.” Stated a senior Republican in Congress.  Even news sources, such as the BBC, reported on the 17th of August 2021 that “the decision to cut and run Is being seen as a terrible blow to US credibility – to its reliability as a partner, and indeed to its moral standing in world affairs”. Therefore, by the Taliban being allowed to return to power in Afghanistan it has weakened the global perception of the US’s might in their ability to act as an international peacekeeper.

The Taliban’s re-establishment of power also has significant impact in the Middle East. This region of the World is geographically closest to Afghanistan and consequently faces the impact from the current and future events that are taking place. The increasing diplomatic involvement of Qatar and Turkey, the escalation in radical political ideology and the increasing tension between the Middle East and the West is unsettling in an area of the world which has not too distant memories of ‘The Arab Spring’. Due to the increase in Taliban Power, Qatar and Turkey (being the closest politically stable neighbours) have a vested interest in being the go-betweens for the Taliban government and the West. This can be seen with the statement “Afghanistan and the Taliban will be a significant victory for Qatar, not just because it will show that they’re able to mediate with the Taliban, but it makes them a serious player for the Western countries that are involved.” – by a senior adviser at the International Crisis Group.

The Taliban renaissance has caused diplomatic relations between Arab powers to change. There is an evidential sense of pessimism in Middle Eastern politics towards their perspectives on current Gulf security as stated by UAE political commentator Abdulkhaleq Abdulla; “The strong return of the Taliban to the Afghan capital and the escalation of the Iranian threat indicate that the Gulf security equation will be very different this century compared to the last.” Therefore, the return of Taliban power has impacted the Middle East’s mindset on regional security and escalated the potential political level of threat they pose.

In conclusion, the impact of the Taliban’s rule should not be underestimated. This is a nation that has been deemed a “graveyard of empires” as it clearly has consequences on world peace, in terms of straining relations between East and West, posing a physical threat to neighbouring regional security and by the way it constantly and aggressively challenges the ideologies of western civilisation. Afghanistan is a problem that has no easy solution and the solution is not ignorance. It is the eye of the storm and an epicentre that has shaken the world like an earthquake sending political shockwaves informing all the risks that an uncontrollable eruption could occur of monumental impact at any given moment. Let us hope we can learn from our political past and that Afghanistan, and the Taliban are not this generations Vesuvius to our Pompeii.