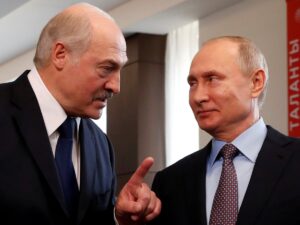 ince the start of Putin’s spell in power since his first presidential inauguration in 1999, Russia has become more and more disassociated with the Western world.

Before making his way up to the pinnacle of government, he earned his place there through serving as a foreign intelligence officer in the KGB for 15 years. Once he retired from the KGB, he became the first elected mayor of St Petersburg.

When elected in 1999, Russia both domestically and internationally gained a much larger fear factor. Russian citizens clearly fear him and although in recent years his rule has been challenged more often, he still has ultimate authority over the public. I am not saying that by any stretch of the imagination that Putin implements the same levels of fear as Stalin or Lenin did, but he is still clearly a deterrent to the Russian population from rebelling or uprisings as Putin is so unpredictable and has a short temper.

Internationally, Russia has also become seen as a big threat to the Western world due to the large increase in their military capabilities. This was shown in the recent war games performed by Russia and Belarus. It was a 5 day military exercise which took place on the Belarus-Poland border, which involved Russian and Belarusian military performing a joint drill, which is claimed to just be an exercise, but it is clearly a power play by Putin and Lukashenko to demonstrate their power to the west and NATO.

It is also a cause for concern in the west as it shows the strengthening relationship between Putin and Lukasenko, and Belarus is effectively a Russian satellite state at this point. The fact that the west have taken no action over this may lead to the Russians trying to push into other states, such as Putin’s long time desire: Ukraine.

In fairness, Putin is somewhat justified in his obsession with Ukraine due to the vast number of Russian nationalists living in eastern Ukraine. In the last Ukrainian census, 8.3 million citizens identified themselves as ethnic Russians, and the majority of the population living in Crimea were Russian.

However the fact that the West has done near to nothing to try and contain Putin’s obsession is a fatal error, as if he has received no backlash for the recent war games and the annexation of Crimea in 2014, Putin would have no reason to not try and claim Ukraine.

Ukraine is also not a member of the EU or NATO, which is another reason on a long list for Putin to try and ‘reclaim’ Ukraine.

Putin could be already trying to make indirect claims for Ukraine, as shown in the recent assaination attempt of Ukraine’s president’s aide, which could be Putin sending an indirect message to Ukraine. Russia has of course denied all responsibility, but it is highly unlikely that Russia was not involved in some way or another.

Russia has received little to no sanctions for these recent actions. They were of course removed from G8 after the annexation of Crimea, but I highly doubt that it kept Putin up at night and was probably not bothered at all.

Obviously a big reason for the lack of punishment is Russia’s nuclear capability and Putin being seen as a potentially ‘trigger happy’ leader and would send nukes to the west whenever he wanted. However, I think Putin is a lot smarter than that. Putin has realised that NATO doesn’t want to step on his toes as they are scared of the Russians response, but Putin knows not to push too far and understands his boundaries and how much leniency the west will give him.

Another reason that the rest of Europe don’t want to punish Russia is because they provide a large amount of gas to the rest of Europe. They provide 80% of Germany’s, 70% of Poland’s and many other countries such as France, Italy and Belgium. The key problem with this for the west is that Russia can turn the taps off from the Kremlin, which would be a huge problem for most of Western Europe, and with a new pipeline from Russia to Germany being finished last week, this issue becomes more pressing.

Overall, I understand the predicament that the West are in when it comes to Russia, and there are several reasons why they can’t put in place harsh sanctions, but surely they must be able to do something. IGO’s have also had little success, despite one of their top priorities being protecting human rights, which are clearly being exploited in Russia for people such as Alexei Navalny and his sympathisers.

The west has to do more or Putin will just continue bending the rules and trying to expand, which would be a serious worry for Europe and the rest of the world.