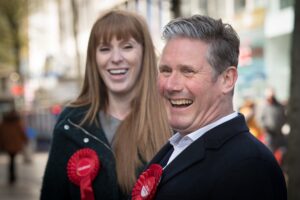 As a leader, Keir Starmer is not strong enough to be a serious competition to the conservatives. This is because he and his party have not taken a clear enough direction. First and foremost, Starmer needs to forge a party with united MPs, rather than the current Labour Party, which contains some ministers who are far-left, and some who are more centrist, following the third-way. Taking the far-left route was successful for Jeremy Corbyn to gain a lot of support, but not successful enough to lead him into power, and ended up being his downfall, dividing the party and leading to his resignation. To therefore take this far-left stance would not benefit Starmer or the party, as it would replicate the divisions in the party, and not win them the favour of the electorate.

On the other hand, it would not currently be beneficial to the Labour Party to become too centralised in terms of ideology. Whilst the ‘Third Way’ was hugely successful for Tony Blair from 1997 to 2007 and Brown from 2007 to 2010, that was in a time where trust in the Conservative government was scarce, with sleaze allegations, such as the 1994 “cash-for-questions” affair, in which members of the Tory party were bribed to ask specific questions and report back to a journalist. The more central Conservative supporters therefore flocked towards Blair’s Labour.

This is not the case now, with the Conservative support being high after the successful vaccine rollout, and so becoming more central would place the Labour Party in a similar position to the Liberal Democrats, simultaneously lessening the support of their more left wing supporters (and potentially the trade unions). Therefore, Starmer should take a stance in a position that is middle-left, as he needs to implement policies that will keep both sides of his support base, whilst attracting in supporters from smaller parties like the Lib Dems. Most importantly though, is that Starmer picks his position and sticks with it instead of floundering as he currently is, not giving the party a clear direction.