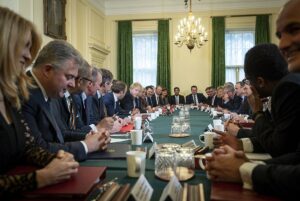 With a cabinet reshuffle expected in June, Boris Johnson will have the opportunity to address both the “woman problem” in his cabinet and sack ministers who have not performed well since December (and especially during the pandemic) in order to create a strong cabinet to take the Conservatives into the next general election.

Boris Johnson has already alluded to the potential promotion of Elizabeth Truss from her position as Secretary of state for International Trade to one of the great offices of state  following a spike in her performance in recent months after initially underperforming and being considered vulnerable in the reshuffle. Not only do her performances merit a promotion, Truss getting promoted to one of the great offices would also aid the prime minister in addressing the lack of women in the cabinet and in senior positions.

Another MP who has been tipped for a promotion in the upcoming cabinet reshuffle is MP Steve Baker. Baker has been an outspoken critic of the government’s lockdown measures and thus the prime minister is reported to be considering promoting him to a cabinet position in order to appease the critical faction of the Conservative Party by giving them representation in the cabinet.

However, due to the intense nature of the pandemic, there are also cabinet ministers who have publicly underperformed in their department. The first example of this is Matt Hancock. The Department of Health has spent a reported £148 billion during the COVID-19 pandemic and thus Matt Hancock has come under scrutiny from both the public and backbenchers due to his inability to effectively deal with the virus. The epitome of this failure was the government’s failed test and trace programme which cost them £10 billion. Therefore, a potential replacement for Hancock could be Neil O’Brien who has been tipped for a promotion due to his public support of the government’s lockdown policy from the backbenches and thus the prime minister is seeking to reward him for his loyalty.

Another cabinet minister who much of the public have called to resign is the Secretary of State for Education, Gavin WIlliamson. Williams was the centre of the controversy surrounding the algorithm for predicting A-level and GCSE grades and thus received the brunt of the backlash from both the public and the backbenchers. As a result of this, many have called for him to resign or be sacked in the upcoming reshuffle. However, it is not as simple as this for Boris Johnson because Williams was the Conservative Party Chief Whip from 14 July 2016 to 2 November 2017 and thus potentially has damaging information on a lot of the cabinet ministers due to that being a key aspect of being a whip. Given this, despite his immense underperformance during the pandemic which culminated on results day in August 2020, we do not believe that Williamson will be sacked from his position due to his previous role as Chief Whip and he damaging information he may leak in retaliation to being sacked.

The final cabinet minister who it has been indicated by Number 10 aides to potentially be moving department is Pritil Patel. Currently the Secretary of State for the Home Department, Patel has recently faced a series of allegations for bullying and thus it has been suggested that she may be reshuffled out of the great offices into a less senior role with Party chairman being the main role speculated. Alastair Campbell, Blair’s press secretary, would have supported this argument with his “golden rule” stating that if a minister was at the centre of a scandal for a given period of time they would be forced to resign. However, despite these suggestions we ultimately believe that she will remain in her current cabinet position because she has performed well in her role since December 2019, she has lots of support within the party who have suggested she resist any attempt by the prime minister to reshuffle her and she is also one of only five women in the cabinet and the only woman in one of the great offices and thus it could prove fatal if Johnson were to demote her given that he has already been criticised for not giving women a more prominent role in his cabinet.

However, in the unpredictable world of politics four months is a long time for ministers to either prove their worth in the cabinet or provide the prime minister with a reason to sack them and thus the result could prove to be entirely different for all suggestions tipped thus far.