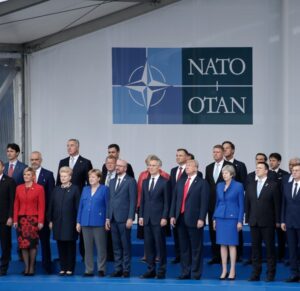 NATO was created for the purpose of opposing Russia as a superpower and protect the Western European countries from Russian invasion. This threat largely does not exist any more. Russia is no longer a superpower and is definitely not the greatest threat to West any longer. China is gradually gaining superpower status and is expanding its influence into Africa. China’s ideology is just as much a threat to Western ideology as Russia’s was and the influence China has over some governments in Africa is becoming increasingly worrying. This is but one of the main threats that NATO should be dealing with now instead of Russia.

Without NATO or if NATO was to reassemble with a completely new purpose these threats could be opposed. One can accept that there is still some threat from Russia of expanding into Western Europe and although much weaker they remain an unpredictable unit. In this way, some focus on Russia is justified although not to the extent that it is currently. However, it is important to note that when Russia did expand and annexed the Crimea in 2014 NATO did not protect Ukraine or do anything against Russia afterwards. This suggests that the purpose of NATO is not only outdated but also in vain because the organisation is not capable of fulfilling it.

NATO is also problematic because the 30 members often disagree greatly and in recent times discussion has become quite heated between Macron and Erdogan and also between Trump and all the other members. There is dispute over members paying vastly unequal amounts towards their military and even over the necessity for the organisation at all.

Despite this, some sort of North Atlantic alliance is probably necessary because the Western countries share common threats from Russia, China and elsewhere. Therefore, even though NATO is currently failing to fulfil the needs of its members, NATO in some way cannot be completely obsolete because there will always be a desire for a military alliance of the Western countries. We can see the potential NATO has to fulfil this truer purpose through its military interventions in Afghanistan, Kosovo and helping the African Union in Somalia. Perhaps, if it was fulfilling this purpose there would be less disputes between the members and more decisions can be made.