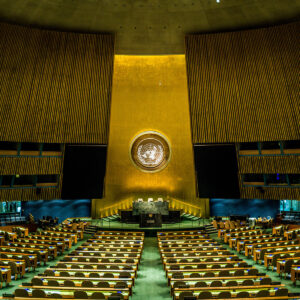 The UN as a global institution is not unfit for purpose considering the state of international relations and the modern issues that it has adapted to be able to battle. However this does not mean that it is without its flaws, as self-interest, the use of the veto and an inability to effectively enforce its views onto international affairs, as well as having an arguably outdated structure, all hinder the effectiveness and damage their reputation as a key component of international politics and conflict resolution.

The UN was founded in 1945 with the intention of maintaining peace and security and resolving conflicts, whilst coordinating cooperative responses to issues over human rights and other humanitarian crises. When reflecting upon this, the lack of a third world war and the relatively stable period since its formation in 1945, following the two most violent wars in history and the incredibly turbulent period that came before, it has been successful in what it was designed to do. Furthermore, they have adapted to modern issues as seen in their work to reduce poverty through their MDGs and SDGs, a thorough and sustained focus on this issue with their 30 year programme has reflected their key role in resolving modern issues.

The effectiveness is also reflective of their beneficial role, with 1.9 billion in 1990 living in poverty dropping to just 836 million in 2015. However they have also dealt with other issues such as human rights and climate change, through the adoption of the UDHR and the legally binding international human rights laws that stemmed from this, and the UNFCC which provided the structure for climate change talks since 1992. This is clear evidence for its front-runner approach to tackling global issues, and for its efficient and effective role in branching out from conflict resolution as the need for this dwindled after the Cold War and WW2.

However, there are a number of flaws that may be used in an argument to suggest it is unfit for purpose, such as its outdated appearance. This is because it has five permanent members of the UN that represent the world order of post-WW2, rather than 2021. With the UK and France arguably lacking the status of significant powers, and countries like India or Germany lacking from the list.

Furthermore its use of the permanent veto means that the self-interest of the 5 permanent members govern and dictate what issues deserve intervention / aid / resources, rather than based on the views of everyone and on thee merit of the situation. For example, Russia has vetoed 16 times since 1993, and 143 times in total, with this having major implications on humanitarian issues and conflicts, as they dictate who receives help. It also lacks enforcement accountability as a result of the difficulty of upholding international law, and the lack of international ‘police’.

Overall, the UN is fit for purpose as it plays a coordinating role to fight the major issues of the modern world, such as climate change and human rights violations, with the help of other IGOs / NGOs. It also has been relatively successful in preventing major global conflicts since the end of WW2, and has adapted from its previous military focus, to a range of issues. As an institution it represents interconnectedness and cooperation, as a forum for every country in the world, and treats states as equals regardless of their political / social / economic standing. Therefore it plays a major role both symbolically, and physically in keeping up with major global issues of the 21st century.