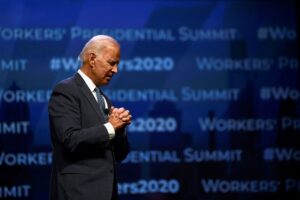 The recent US election is possibly the most important election of the last century. It has been a battle for the soul of America and dictates the country’s future relationship with foreign powers. It’s impact will be remembered. But what is really going to change? Undoubtedly many things. The most significant being that the underprivileged, the underserved, the working class, the young of the United States now have hope. Biden simply does not fit every ideal, however he has demonstrated he is looking out for the people with no voice. Biden may not be able to prevent the ruin of democracy in the US, yet he is not a businessman running for uncontrollable amounts of power, he is a public servant running to fight for his people. And that is far better than anything else that will come with the result of this election.

The way Donald Trump led the country was unrealistic and shortsighted. He ran it from a place of obstinate personal belief, deliberate turbulence and inconsistency. He would withdraw from global agreements as he thought the US was being treated poorly. Alliances that have taken since the end of the First World War to form. The democratic values that America insists are key to its foundation… ignored. And this, this is what Joe Biden can definitely change. Joe Biden follows the belief of democracy. The idea that everyone gets a vote, everyone gets equal say. This key intention that got president Obama elected before him.

President elect Biden has expressed his intention on racism in the US and how he plans to address it. A vision for an economy where Black, Latino, Asian and Native Americans are full participants and to promote small businesses run by people of any race. He showed his commitment to this by electing a fully diverse staff, unlike the one we have seen for the past

4 years. Systemic racism is hard to get rid of. It is buried in the very constitution of the country. It’s roots. President Biden however, is a step in the right direction.

Mr Biden’s plans for climate change are ambitious. In fact there is no other conventional politician that has expressed as much worry for the global crisis we find ourselves in. Not only has Biden promised to re-join the paris climate agreement, he has also proposed a pioneering 2 trillion dollar plan to help reduce emissions in the United States. A huge push on electric vehicles and a promise to be net zero as a country before 2050.

Effectively, Biden simply cannot arrest the decline in democracy. After all, the US was never intended to be a democracy, it was intended to be a Republic. And even then, the country is far from that. The rise of lobbyists and the huge industry behind influencing political campaigns encourages corruption and slaughters anything close to a democracy. All this being said, Joe Biden supports the idea that it is not about democrat or republican. It is about lessening the broadening divide between the privileged and the working class. Being a good leader means supporting the concept of unification not segregation. Therefore in terms of the effects the recent election has on the country itself, it is safe to say it is on the best course of any. The only worry is how ‘Trumpism’ will evolve in the next four years. Whether or not it will grow or subside.

As well as national movements and foundational changes, the result of the recent election will greatly alter the relations the US has with other global powers. Primarily China and Europe. Now, President Biden is certainly starting on the back foot. One of the main things he will have to fix is the country’s relationship with other world leaders. A vital aspect being Chinese ambition. During Mr.Trump’s presidency, he expressed an aggressive position towards China especially towards the end of his term. From directly branding the coronavirus as a ‘Chinese virus’ to his relentless efforts to ban Chinese owned and controlled apps such as Tik Tok and putting punitive tariffs on Chinese goods. This was a populist move. You would therefore assume that China would be looking forward to Biden to coming into power… but that is a naive assumption to make. History has shown that China and its economy thrive when the US is divided. Thrive when their relationships with others are at fault. Biden has expressed clearly his intent to mend these broken relationships. So for china, this is less than ideal.

As for the future of the special relationship Mr Trump shared with Prime minister Boris Johnson, it is my firm belief that it will change, but equally prosper. Trump was a firm believer in the concept of individualist countries. Independence to say the least… exactly what Johnson supported, therefore leading to Brexit. Whereas Biden is more for unification. This will surely create an interesting dynamic. Nevertheless, When the election had been determined, Johnson announced how well the congratulatory conversation had gone with Biden. How the two men are both “big believers” in the transatlantic trade alliance and are looking forward to “sticking up for democracy around the world.” The question is, whether these are merely words or genuine intentions particularly as Biden is so strongly opposed to Brexit and is troubled by the Irish question.

The election process has been a rollercoaster. We now have a winner. Even with all the information, statistics and analysis we have on the future cannot be controlled. At the end of the day, no matter who leads the United States, the country still follows a constitution written over 200 years ago. They still follow gun laws that were made when men would settle their arguments in a gun duel. The loser got shot first. A constitution written when slavery was equally prominent. A time when the total population of the country was 4 million. Today the population is over 328 million. For us to see real change in the United States, the constitution needs to be changed, fundamentally. And if it isn’t, who knows what’s to come?