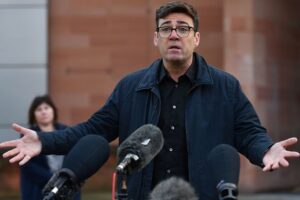 Sir Keir Starmer is turning out to be a savvy strategist. In a national crisis, he has been careful to convey a stance of constructive support for the government in Westminster, with his MPs whipped to go into the same division lobbies as the Conservatives. It has been left to the rebellious libertarian Tory backbenchers – the likes of Sir Desmond Swayne – to shout that the government has been captured by “the science” and the need to “help the NHS”, and has consequently (arguably) ruined the economy and the public finances for the sake of nothing other than kicking the COVID-19 can down the road.

Yet Starmer has now opened up a new political front by proxy. Instead of taking on the Conservatives in the Commons, he has chosen to attack them on the current vital ground of British politics – the “Red Wall” – and he has surprised them by launching from the concealed approach route of devolved government.

Directly elected Manchester metro-Mayor Andy Burnham, the so-called “King of the North”, is the general he has placed in charge of this operation. Or perhaps Burnham is more analogous to a great Baron acting autonomously, but with the King’s favour. Either way, he and a cabal of northern Labour MPs are seeking to re-frame the narrative of the mythical North-South divide. Burnham has accused the Westminster government of enforcing punitive Tier-3 measures on the Manchester area even though, he claims, areas of the South with similar pandemic statistics are being treated much more leniently. He has demanded more money for Manchester to ease the impact of the Tier-3 measures, knowing full well that the government cannot accept this demand.

Why not? Because it cannot do so without having to make identical provision for other regions also being put into Tier-3. This would put intolerable strain on already stretched public finances, and in any case there is still a pretty generous furlough scheme in place, which Burnham is not keen to mention. He accuses the government of “walking out of talks”, when the Communities Secretary had made many conciliatory gestures towards local government representatives who had no legal or constitutional right to be in “talks” with central government in the first place. The BBC, delighted to see this government getting a clobbering, has been eager to egg it all on with plenty of coverage portraying these events as an epic of crisis summitry, rather than just a few local politicians trying it on.

Callous Tories, once again showing their true colours! They don’t give a damn about the North! That is the message Burnham is aiming to convey to those Red Wall swing voters on the fringes of Manchester and Leeds. They should never have given their votes to a Conservative Party that lies about “levelling up” whilst only really caring about London and the Home Counties. Lisa Nandy, Labour MP for Wigan and shadow Foreign Secretary, appears on the news claiming that she has not seen such an attitude towards the North since the days of Margaret Thatcher, evoking the potent folk-memory of the savage de-industrialisation of the 1980s from which Conservative electoral fortunes across the North have only now recovered. We need to “stick together” against the government, she says, speaking not as a shadow minister of course, but as a Lancashire MP.

So much for the first part of the strategy. In coordination with this, Sir Keir Starmer has added the second and complementary part, by making an open and public offer to Boris Johnson that Labour would fully support a national “circuit-break”: a full lockdown strategy in other words, affecting not just the North, but the whole of the country. Sir Keir knows full well that the Government cannot accept this offer because it would trash the much more flexible three tier system, it would make the government look like it is dancing to Labour’s tune, and it would be ruinously expensive. It would probably split the cabinet and even bring down the government, in fact.

But Starmer’s intent is not to get the government to agree to this circuit-break idea. His intent is to make the government look like it is not willing to impose measures on the South that it is perfectly happy to hammer the North with. The message is calibrated to strike a chord with the swing voters whose businesses are going to be clobbered or whose jobs may be axed. (He is not appealing to Labour’s core vote. Their public sector jobs are far less under threat.) Labour wants to get the message across that, when the Tories say that “we’re all in it together”, they are lying. Starmer has an eye not on Manchester, nor on Leeds nor Newcastle, but on Westminster. He and Burnham are wooing “Mansfield Man” and “Worksop Woman” – or whatever the nicknames may be for the fabled swing voters that could yet return Labour to power.

Starmer is therefore politicising the Coronavirus crisis whilst at the same time managing to appear not to do so. He has not left himself open to the timeless slur of “playing politics with people’s lives”. The same has been true from the start with the SNP government in Scotland, which has sought to pre-empt decisions (such as over A-Level grades) made in London, in order to make the government look like it is taking the lead from Edinburgh, thus burnishing the SNP’s credentials for confident, independent government. Nicola Sturgeon was quick to counter-mand foreign travel quarantine measures, emanating from London, because this conveyed a subtle message – that Scotland controls her own borders.

Keen to flank the Welsh nationalists of Plaid Cymru, the government in Cardiff has sought to pull the same trick, very publicly laying down an ultimatum to Boris Johnson that, if English tourists from Covid hotspots were not banned from crossing into Wales, then the Welsh government would take unilateral action to block the border. All three devolved governments have felt free to impose swingeing lockdown restrictions, well in excess of those in place in similarly affected regions of England. They know that the furlough money will come from London, but that any credit for leadership or public health outcomes will be rewarded to them. In fairness, they are also motivated by the public interest; but only a fool would deny that they are scoring political points at the same time.

The grandstanding of Burnham and other directly elected metro-mayors is only the latest manifestation of the malfunctioning of the Blair devolution settlement – or rather, non-settlement. Since 1997, devolution has been sliding towards making the United Kingdom an incoherent entity. It is the peculiar nature of the Covid crisis – with its necessity for localised responses in the policy realms of healthcare and policing – that has exposed how unclear this settlement has become. The quasi-federal constitution is shot through with imbalances and anomalies, competing mandates and centrifugal dynamics, and all of these are aggravated by national and regional identities and loyalties. It was already strained by Brexit, and by the piecemeal, defensive and reactive concessions thrown out by the coalition and the May government. Now it is looking like cracking apart.

Yet a break-up of the United Kingdom would be a tragedy and a shambles for all four nations of the Union. We may now have come to the point where, contrary to von Hayek’s essentially conservative instincts, a far more comprehensive and even codified federal constitution should be created. And if so, it should be backed by a far more strident, confident and passionate defence of unionism than the so-called Conservative and Unionist Party seems capable of providing.