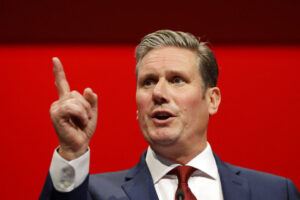 When you have political pundits from The Sun, Mail on Sunday and even Guido Fawkes praising the leader of the Labour Party for his conference speech, you know that he must have done something right. This morning Sir Keir Starmer took to an empty stage to deliver his first Labour conference speech as leader and immediately went for the jugular of not only Boris Johnson, but also his predecessor Jeremy Corbyn.

The speech itself was very policy light, but heavy on values and competence , with Starmer making a very concerted effort to portray himself as a competent strategic decision maker, up against a bunch of cowboys in Number 10 Downing Street. There was a clear pitch to the ‘red wall’ seats in the north of England where Labour were trounced in 2019, with Starmer taking a line from David Cameron in promising to ‘stop banging on about Europe’ and putting the Brexit debate well and truly to bed, with the focus on getting a deal with the EU secured as soon as possible. This suggests that Labour will potentially back any agreement that Johnson secures with the EU so as not to be portrayed as ‘Brexit blockers’ any more.

Starmer also directly named three former Labour Prime Ministers seen as instrumental in the modernising social reforms they each bought to the UK; Clement Attlee, Harold Wilson and Tony Blair, before claiming ‘I want to be the fourth’. This indicates that Labour’s strategy moving forward will be a pivot to the future post Brexit, post Covid world, identifying themselves at the party of progress in the face of Tory stagnation. There was clear distancing from Corbynism at the offset, with Starmer being introduced to speak by the former MP Ruth Smeeth, who was famously heckled for speaking out against anti-Semitism in the party by activists loyal to the old regime back in 2018. A new slogan ‘under new leadership’ is now front and centre of Labour’s new PR campaign to floating voters to essentially beg forgiveness for the past four year and to reconsider giving Labour another chance.

It will be interesting to see if Labour receive a bounce in the opinion polls following this speech and also the rather unpopular new restrictions that the Conservative government will announce this week to deal with the potential for a ‘2nd wave’ of Covid-19. It is clear though that the Tories are going to have to start taking Labour seriously again and work harder if they want to keep all of the new voters they won over with their ‘Get Brexit Done’ slogan back in December last year. At present they appear to be floundering. Boris Johnson paints a sad, tired figure in every television appearance he makes, a drastic change from the bombastic, charismatic, JCB riding bombshell that was front and centre of a very successful election campaign a mere nine months ago. He and others around him do not install any confidence, from Matt Hancock’s failure to provide a working ‘test & trace’ solution, Gavin Williamson’s mutant algorithm and Patel’s ‘dob in your neighbour’ advice, it is policy on the fly from a group of Johnson loyalists who are clearly out of their depth on the Treasury benches.

It is not all plain sailing for Starmer though. The Corbyn wing of the party is still strong likely to try to hold him accountable for the key left-wing pledges he made in his Labour leadership campaign, which will be an open goal for the Conservatives should these be adopted. He also has a major problem when it comes to Scotland and the big rise in support for the SNP. It is likely that the only path to a Labour majority in a 2024 election will require Labour to win back a number of seats north of the boarder, but with a big lack of leadership in Scottish Labour, Starmer may well have to consider whether offering a 2nd referendum on Scottish Independence as a price for a potential confidence and supply arrangement with the SNP in the event of a hung Parliament is something worth paying for Labour to, in his words, ‘step out from the shadows’.

The opening salvo for the 2024 election has clearly been fired this morning and it is already making for scintillating viewing.