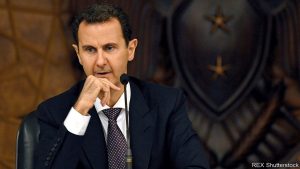 Syrian president Bashar al-Assad once claimed that ‘no government in the world kills its people unless it’s led by a crazy person’. His rule has witnessed the deaths of tens of thousands of Syrian citizens, reinforcing foreign suspicions that he is not as sane as he may claim to be. Ruling in a less than democratic way for two decades, Assad has been challenged a number of times before, although recent anti-government protests seem to have taken a new significance. Even in areas that have been loyal to Assad during his reign, unrest is reaching unprecedented levels, providing the possibility of the Syrian people finally achieving what Britain and America could not. Assad’s situation is precarious, and one false move could topple his regime.

In the last year alone, Syria’s currency has lost 80% of its value against the dollar, with economic turmoil in neighbouring Lebanon massively fueling this reduction. Sanctions from the USA have also just been expanded, placing Syria in an extremely unstable economic situation, as the future is even harder to foresee. The effect of this instability on the population has been drastic, with the cost of living rising dramatically, along with shortages of rice, flour, sugar and medicines causing a lack of staples nationwide to feed the country. As a result, widespread discontent has surfaced, which is far from uncommon in Syria, although as mentioned before it appears this time things may be different. The challenges Assad will face in attempting to suppress the demonstrations of areas he largely relies on for support will be vast, and it is clear he must tread extremely carefully to avoid exacerbating the situation and risk further threats to his power. This will certainly be no easy feat, potentially contributing to his eventual fall.

‘We promised to keep things peaceful, but if you want bullets you shall have them.’ These were the warning words of the Druze community, who despite having largely avoided Syria’s civil war throughout the last decade have begun to make their stance towards the government as clear as possible. Such a statement of political intent from a group that has avoided such politicisation has sent alarm bells ringing for Assad, leading in part to the sacking of Syria’s prime minister Imad Khamis just under two weeks ago. The implications for such an act are far greater than they may first appear, symbolising the president’s vulnerability as he grapples desperately in an attempt to preserve his ‘legitimacy’ and resolve the unrest in any way possible. The door is ajar, the opportunity for someone to prise it open is better than ever before and the race is on for Assad to slam it shut before he is exposed further.

America will only be all too aware of Assad’s newfound exposure, wanting to exploit it as swiftly and effectively as possible. Now is the time for the White House to exert whatever pressure it is able to, by influencing the correct anti-government channels and steering the direction of protests to the full extent of their capabilities. If the USA were to play a role, even from a distance, it could wreak further havoc for the Syrian state, giving yet greater potential to the possibility of the 40-year Assad regime coming to an end. It would certainly be Trump’s goal to cause further disruption in the region, with the success of American pressure possibly being the influential factor which could decide the fate of the Syrian state.

Other possible scenarios include Assad taking Syria down the lonely isolationist path, drawing on his ‘loyalist’ population for the support he would need to ensure such an outcome would achieve success. Certain issues would arise for the president if he were to take this course of action, however, as not only is his support base not as loyal as he may have hoped following their support throughout the worst war of the last decade, but his already questionable ‘personality cult’ seems to be suffering greatly. Potentially a more disastrous scenario could include unimaginable economic and humanitarian consequences for Syria, which could be plunged into a period of great destitution, with no government to fill the void of aid that would be needed so badly.

Whatever the case, Assad’s situation looks likely to worsen. This is what many have called his ‘biggest test yet’, and his ability to weather the storm could determine the future of Syria for decades to come. Having withstood everything thrown at him so far, there is no reason why Assad cannot once again unify his loyalists in solidarity against a potentially debilitating threat, although this time appears to be different. What would follow an upheaval of the regime that has governed Syria for so long? The question remains to be answered. However, Assad’s downfall could finally be on the horizon, something that will be music to the ears of countless people across the globe.