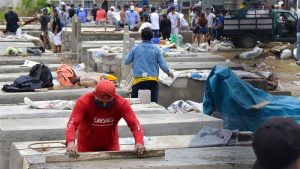 Overshadowed by their northern neighbours economically, politically and socially, Latin America sees the spotlight far less than they would like, except where drug wars, and immigration into the US are concerned. Covid-19 has been no different, with the 1.4 million cases in the USA diverting attention away from where it may prove to be essential. Latin America has a Covid crisis of its own, yet is underprepared and fundamentally vulnerable.

Many economies in Latin America are already weak, and Venezuela is the weakest of them all. Although the death count is fairly low, the healthcare system is ill equipped to deal with the inevitable wave of cases to come. A shutdown is already in place to prevent this, but it is feared the economic consequences of such restrictions will lead to a crisis on top of another crisis for Venezuela.

Unlike Venezuela, Ecuador has failed to keep the virus under control, and the health system has already collapsed. Thousands of people have been unable to receive treatment, with mortuaries overwhelmed and family members searching for sometimes days to find loved ones. The situation has only aggravated economic problems further, and the outlook seems bleak.

The problem is even worse for the poorer countries in the region. Haiti has a grand total of 100 ventilators for 11 million people, meaning one per 110,000 people, or the equivalent of one ventilator for two full Anfield stadiums. Unlike the developed western states, Latin America’s countries do not have the funds to save themselves from a long-lasting and damaging economic recession, further threatening the lives of many due to poverty, malnutrition and disease.

Venezuela, Ecuador and Haiti are all countries enforcing lockdowns, but Brazil has not followed suit for fear of an economic recession, and is beginning to pay the price. The healthcare system of the largest economy in Latin America by some distance is under strain, and so close to buckling completely, that football stadiums are being converted into temporary hospitals. Frequently used for major local football derbies in São Paulo, the Estadio Municipal has been fitted with more than 200 beds for patients with covid-19, demonstrating just how dire the situation has become.

Nicaragua has been equally as ignorant of the virus as Brazil, also fearing the economic consequences. This could later spell disaster for the country, but only time will tell.

While all other parts of the world have either reached the peak, or are on the comedown, Latin America is seeing a surge of cases. Yet the region’s two biggest economies, and most populated countries, are failing to read the warning signs. The healthcare system across the entire region will be unable to cope with the full impacts of the virus. Latin America is in desperate trouble.

The pleas for help will come, there is little doubt. Brazil and Mexico are already digging their own graves, and the cries of desperation from smaller nations will be drowned out by the cacophony as America mourns its dead. The last corner of the world to experience the crisis will be the least of bigger powers’ worries, but worry Latin America must. The storm is brewing, the winds are howling, and the inevitable shipwreck will leave millions in need of rescuing.