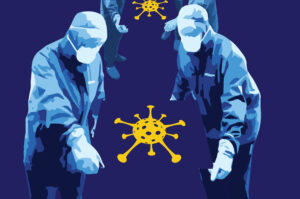 Just three months ago no one could have ever anticipated the scenes across the world that now fill every page of every newspaper every single day. I cannot remember the last time I opened my BBC News app and didn’t find every single one of the top ten “most read” stories having something to do with the coronavirus. I remember very clearly the moment when that inevitable news tab appeared on my phone declaring the first case of coronavirus had arrived in the UK; it was just as I was putting on the final touches of a painting displaying figures in hazmat suits, something that now seems eerily prescient when looking at scenes of people wearing these very same suits in number all across the world.

If we look at the world order 3 months ago, perhaps we could no longer ignore China’s continuing growing influence, but the USA was still very much the global leader in international politics. The world polarity has been in question for some time but there was still a strong argument for why the world was still in a state of unipolarity with the USA at the top. However, much like every aspect of our lives in the past 3 months, the balance of power in global politics has undoubtedly changed and the true extent of this will not be clear until the aftermath of this pandemic.

At first this virus looked like another nail in the coffin for China’s economic growth hopes in 2020 following the slumping it was suffering from the US trade war. China’s hopes of taking its place as the new world hegemony appeared to be crippling as it was forced to put its economy on standstill quarantining 780 million people (half its population). However, who could ever have imagined that three months later China’s greatest rival the US would be suffering far worse consequences with a death rate 10 times higher than China. It is very clear that the USA will be the biggest losers from this pandemic. America’s “most dangerous president in modern history” according to Bernie Sanders could not have come at a worse time if the USA wants to keep the balance of power on its side. Trump’s “America First” vision is rapidly deteriorating its position in the world order amidst a pandemic where global cooperation and a global leader has never been more important. His latest stunt of deflecting the blame on the WHO by withdrawing funding, is once again feeding China another opportunity for more power on the world stage. China’s contributions to the WHO have risen by 52% since 2014 displaying its growing influence in international organisations.

It is very likely China will take this opportunity to fill the funding gap left in the aftermath of Trump’s latest outburst, increasing their influence and power even more. The tables have most definitely turned as China comes out of this pandemic with more power than ever before. They have beaten the West in the political chess game that is behind every decision of every great or superpower as it continues to battle what is for them still very much the early stages of suppressing and defeating this disease. China’s digital police state has never looked more appealing as China now returns to a relatively normal life, or at least the “new normal” within just 4 months of its first case despite there being no vaccine available.

This debate of winners and losers can in no way be concluded without looking at another one of the biggest losers in the fight against this pandemic, the European Union. We once again go back to 3 months ago where Brexit still dominated the news headlines. Back then Brexit was unquestionably going to be the EU’s biggest challenge of the year, perhaps even of the decade. However, this virus has without a doubt exposed the argument for the Union as fundamentally flawed. When Europe became the new epicentre of the coronavirus it was every state for themselves. The EU was unheard of as Lombardy became absolutely devastated by the virus. Italy’s plea for help was ignored as every member of the EU began to shut up shop and fight the virus on their own. The Schengen borders were closed for the first time in history as it became increasingly clear that the nation state really is the most important actor in global politics. The EU’s role in combating the virus has been minimal and although some people say Germany have had great success in the coronavirus battle, their leadership in their precious union has been practically non-existent as rightly so, they focus on their own citizens.

The interconnectivity of Europe, which the EU has always set out as their main goal and greatest achievement has in this instance been their biggest weakness and a recipe for how to spread a killer virus. It would be a bit far-fetched to predict that the EU will collapse from this crisis; however, it will certainly be weakened to a far greater extent that even Brexit could achieve, and Britain may well turn out not be the only nation in the departure lounge of the European Union.