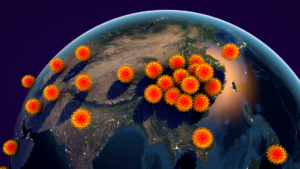 It seems strange to be asking this question in the midst of “a war against an invisible enemy”, as Emanuel Macron described this unprecedented time. Over 183,559 people have died with no sign of this figure really slowing down much. I would not be surprised if by the time I have finished writing this blog that this figure has risen significantly.

However, I do think it is important to think ahead, as hard as it may be. Competing ideologies, power blocs, leaders and systems of social cohesion are being stress-tested in the court of world opinion. In a one-party state, China was able to enforce a complete lockdown where no one was allowed to leave home. In western countries it is harder to do so with people valuing freedom above their lives – especially in the United States. Some countries have been completely depleted by the virus, others it has had very little damage. Nevertheless, countries all over the world will feel the destruction the virus has caused, economically, socially and politically.

How will the two leading countries in the world fair? Will China, where the virus first arose, crumble? Will the US’s American dream of freedom lead to their downfall? What about Europe? How will the UK cope on their own? Of course, these questions can only be answered with time, however, perhaps with the majority of countries reaching their peak of Covid-19 cases we can get a glimpse of how things will play out.

With the official death toll of the UK, France, Spain, Italy and the US rising above China’s, the Chinese hail this as a vast propaganda victory for their strong one-party campaign. It seems as if they are attempting to show themselves as the benevolent father of the world by supplying the world with medical kit. More importantly perhaps, China has re-opened a number of factories, symbolising that their economy is back up and running. This has led some nervous foreign-policy watchers in the West to conclude that China will be the winner from the Covid calamity. It is predicted also that this pandemic won’t be remembered for the human tragedy, but as a geopolitical turning-point away from America.

The United States appears to be in turmoil. Their death toll is 47,974 and seems to continue to rise with no rate of slowing down. They can’t cope with the number of cases, and in New York, they have had to build mass graves to accommodate the number of Covid-19 victims. Yet despite this, the American people are protesting that their freedom has been infringed in lockdown. They refuse to accept that this disease will kill them if they continue life as normal. They cling onto their freedom, seemingly valuing it over their own lives – which from the outside in looks incredibly ignorant and naive. Perhaps the single biggest factor in what appears to be a bleak future for the US is the President of the United States, Donald Trump, is acting like a child. He offers no solution and eggs on the protesters who want to end the lockdown – which goes against all scientific advice. He seems to have no intention to lead the global response to the virus and has vowed to withdraw funding from the World Health Organization for its apparent pro-China bias. As the Economist put it “with the man in the White House claiming “absolute power”, but with the President saying “I don’t take responsibility at all”, China has a chance to enhance its sway”. With Donald Trump at the helm, the US will have to accept defeat by the Coronavirus and a Chinese lead global response.

Europe also looks to be in disarray. Spain and Italy have been hit hard, and have openly criticised the EU’s lack of help. Italy has even threatened to leave the Euro. Furious at their plight being ignored and over resistance to corona bonds, Italians’ sense of betrayal deepens. The Italian Prime Minister, Carlo Calenda, who is part of the country’s most pro-Europe party has openly said the EU “is useless”.

Unless bold action is taken by northern European countries, they risk Italy turning its back on the European project forever.  There are already signs that Italian faith in the EU has been damaged. In a survey conducted last month by Tecnè, 67 per cent of respondents said they believed being part of the union was a disadvantage for their country, up from 47 per cent in November 2018. It seems that unless urgent and vast action is taken by Donald Tusk and the European Union, we could be seeing the beginning of the end for the EU.

Well, what about our own country? How will the UK fair? In the UK a potential vaccine will has started human trials last week. Matt Hancock, the UK health secretary, has said: “The UK is at the front of the global effort. “We have put more money than any other country into a global search for a vaccine and, for all the efforts around the world, two of the leading vaccine developments are taking place here at home – at Oxford and Imperial. If the UK does make the breakthrough, we can expect to see a bright future. We will be leading the world in treating the virus and keeping it under control. As a result, the UK would be in pole position for economic, social and political benefits from the Virus.

To conclude, I expect the winners are likely to be China and, if the UK can make the breakthrough of a successful vaccine, the United Kingdom. I predict the losers will be the United States, Italy and the EU. Of course, only time will tell whether this is the case, but I would be incredibly surprised if it did not turn out this way. At the beginning of the blog post the global death toll of Covid-19 victims was at 183,559. At the end of writing this blog the figure has grown by almost 300 and the figure stands at 183,820! We are still at war with the virus, so stay home, stay safe, save lives!