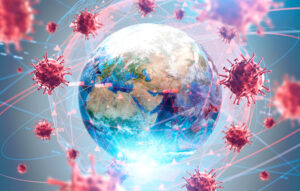 During this pandemic, concerns of the aftermath of the ‘new’ world may seem insignificant but the question has raised a lot of attention. Whilst the salient objective of states is to tackle covid-19 as a collective body and reduce infection to their best ability, some politicians have seen this downfall as an opportunity to take ownership on the world stage. Whilst regionalism held significant power and influence pre-pandemic, major concerns have arisen that due to a potential rise in nationalism and lack of aid that these bodies have offered we may see a mass reduction in regional bodies dominance. Thus, with a decline in regionalism only playing one part of the shift in balance of global power, this could very well contribute to the deconstruction of a multipolar world to a unipolar or bipolar world with hegemonic states taking the lead.

Although China initially received bad ‘press’ regarding the creation and poor containment of the ‘bat’ driven disease, it seems through their highly regulated and socialist state they are now slowly lifting lockdown measures and are slowly returning back to normality, even in the epicentre in Wuhan. Here China could potentially deliver mass aid to countries in need, furthering their political integration throughout the world in a similar nature to their Belt and Road initiative. Being the world’s largest producer of manufactured goods, the world is already heavily reliant on their goods and this could further increase by providing the necessary protective equipment to major states such as, the US and UK. Moreover, due to China’s great economic influence and power throughout the world, the idea of countries ‘locking’ out China in retaliation to covid-19 seems unfeasible and not in any states best interest, thus realists and liberals would argue that cooperation should be the primary objective following this pandemic.

Furthermore, the US is dealing with a vast number of conflicting interests between prioritising the right to life over the right to work and move freely for example, which could call for uncertainty in the following US election, potentially putting the US on the backfoot in the global field of balance of power. The US’ death toll is still rising, thus priorities for the state remain in containing the virus as supposed to securing global dominance in the same fashion as we may see China operate in following weeks to come.

Moreover, I believe there will be a large reduction in the ‘oil-rich’ states such as, Saudi Arabia, Venezuela, Iran and even some parts of the US such as, Texas, following a huge decline in global oil prices this week. Prices for the first time ever were seen to fall below 0$/barrel, which is detrimental to those heavily oil dependent economies, further destabilising their economies resulting in a slow regrow and thus loss of economic influence on the global stage. On the contrary, as we often see within Arab rich states who largely monopolise the oil industry, prices could be set to a high price following a surge in demand since oil is a necessity for countries growth. This was seen following the Saudi drone attack on the 16th September 2019, where US crude oil consequently spiked by 14.6% at the end of the day. Similar actions would slow the regrowth of world economies whilst boosting their own, disperse the balance of power equally, thus returning to a multipolar world.

Therefore, whilst considering various consequences of this recent pandemic, I will conclude in saying that the COVID-19 pandemic will definitely shift the balance of power in global politics, however the extent to which this occurs is large unclear by depending on the state of world economies and health in the following weeks and whether or not China will focus on rebuilding its own economy or seek to help those in need. Moreover, I believe the shift in global power could only be a short-term change until major players have stabilised their own economies and political affairs, thus whilst the Covid 19 pandemic will change the global field, the time at which it pertains is unclear with the thought of a future global financial crisis.