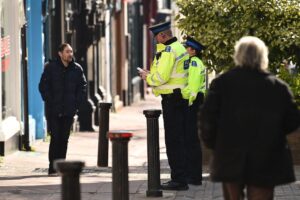 I do believe that to some extent police officers have really overstepped the mark in regards to their conduct during this pandemic, in particular questioning people’s purchases in supermarkets. The concept of an essential item is firstly subjective to the person making the purchase and the police have no place questioning this and it is an absolute violation especially seeing as most of the polices conduct has been based on ministers’ preferences and not by what is actually written in the health protection regulations in 2020.

I also think that questioning people in where they are going and what they are doing is unnecessary to the extent at which the police force is doing it, and that it would be better to focus resources in breaking up people who are already breaking actual law, not those who haven’t done that yet. You may deem this a reactive response rather than proactive but ultimately most people will not be going to social gatherings and will be obeying the regulations and guidelines laid out by the government. In regards to the government forcing through legislation in a rather undemocratic way, firstly in light of the current situation I reckon there’s a high chance that if measures put in place by the executive were put through parliament they would receive support from many MPs and would probably become legislation.

However, it must be noted that these are unprecedented times and our uncodified constitution provides little guidance on how the government should respond to this, but ultimately the regulations put in place are in my opinion reasonable considering the current pandemic. I also think it must be noted that many of the essential workers are provided by the government, both the police and the NHS are risking their lives to help save the lives of both those following the regulations and those who are not, so of course the government is going to put in place harsher restrictions on freedoms of civilians in order to protect their essential workers and limit the patients as well as protect the civilians.

In regards to the police, I think it’s important that we appreciate that this is just as stressful and new to us as it is for them and that they are risking their health and the health of their families or people they live with to do their job. Whilst I think that any cases of them behaving in a heavy handed or massively overbearing manner need to be addressed, I also think that if asked why you are out or where you are going we should all be trying to cooperate and give them an honest answer to make their jobs as easy as possible.  Common sense is very important in times like these.