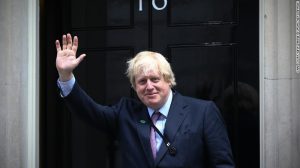 There is a joke going around Politics teachers at the moment and it goes like this. “Have you heard that Edexcel have added a new key thinker to the Socialism topic? It’s Rishi Sunak”. As you can probably tell, Politics teachers are sad individuals who really do need to get out more. The problem with the current situation though is….that they can’t.

Sunak’s economic bailout is quite remarkable, when you realise that he only became Chancellor just over a month ago and only became an MP in 2015. He has earned himself a place in History by providing an economic bailout the like of which the UK has never seen, and probably will not see again. Effectively, over the next few months, the majority of individuals in the UK will be working for the state. Not in his wildest dreams would Sunak believed that he would have to ever do something so drastic when he accepted the keys to Number 11 Downing Street back in February. He has also gained plaudits in the media and from many members of the public due to the calm, collective way in which he has handled the current economic crisis that COVID-19 has caused.

In contrast, Boris Johnson has had mixed reviews on his performance so far, which is strange given that he has yearned for this moment for his entire political career. Johnson has always wanted to be seen as the ‘heir to Churchill’, who has always been his political idol. They do share some similarities; erratic, ego driven, seemingly hap-hazard, disorganised and without a filter. In addition both also have a history of being pretty average at their past ministerial jobs. Churchill never got over his failure of the Gallipoli campaign as First Lord of The Admiralty in World War One or the disaster of returning Britain to the Gold Standard in the 1920’s as Chancellor. Despite his much bravado in the role, Johnson was a terrible Foreign Secretary under Theresa May, constantly putting his foot in it when it came to sensitive diplomatic situations, most notably when trying to persuade Iran to release a British citizen, Nazanin Zaghari-Ratcliffe, from prison where a throwaway comment in a briefing led to her being given additional espionage charges from the Iranian state.

However when Churchill was given the opportunity to lead at a time of crisis, he grasped it with both hands and ultimately proved that he was the great man that Britain required in her hour of need. Johnson is currently faced with the same predicament, but it remains to be see whether his efforts will be lauded in the same way should Britain get through the COVID-19 chaos relatively unscathed. It is likely that the delayed response and policy u-turn he made from allowing the virus to spread to build up heard immunity, through to a total shutdown of the majority of the country will come heavily under the spotlight once this is all over. Similarly the delay in offering assistance to the thousands of self-employed and those working in the ‘gig-economy’ has also not gone down, especially given that the Conservatives desperately want to be the party of enterprise and small-business.

It is looking more likely that rather than being the heir to Churchill, Johnson actually may well become the heir to Gordon Brown. Even if he does lead Britain through a miraculous recovery, the public will not forget who was at the helm of the ship once the iceberg struck, even if the Captain himself was not directly at fault. Even with the best case scenario of things being back to normal by the end of the summer, Johnson will have to deal with the huge amount of debt the government has taken on in order to rescue the economy. Interest rates can not go any lower and there will be no opportunity in this Parliament to introduce austerity measures, given the Johnson mandate was won on a promise to turn on the spending taps. There is also the issue of getting Brexit done, which will now be even harder given the devastating impact that COVID-19 is currently having across the continent. Perhaps, Steven Barclay (Chief Secretary to the Treasury) will make History repeat itself by penning another letter on the eve of the 2024 general election to tell his successor in the Treasury that ‘there is no money left’.

This is not all bad news for Johnson though. He might even realise now that he likely only has five years in office as Prime Minister and if the situation starts to get uglier it might well be better writing his memoirs and giving after dinner speeches for vast sums of cash, rather than having to wrestle with once again bringing down eyewaterinw levels of national debt which will likely take most of the decade to achieve. He could still hope to emulate his hero Churchill, who was the right man in the job at the hight of crisis, but was unceremoniously booted out once the war had ended, leaving Clement Attlee to deal with the aftermath.

All the best to everyone at this difficult time and best wishes for Easter.