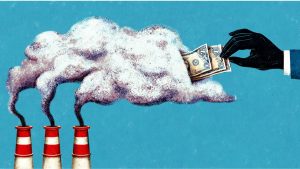 Following the emergence of evidence surrounding the existence of sustained climate change as a result of human activity, in the 1970’s, there has been a partisan divide between two main camps; “acceptors” and “deniers”. Granted, yes there is a third group who fall under the category of “sceptics”, however it is more their apathetic nature towards the environment, opposed to genuine delusion and deep-rooted belief, which serves as a far easier mindset to alter.

The idea of climate change being a myth was first popularised by the Chinese Communist Party in the mid 1980’s, in which they claimed that Ronald Reagan, and his advisor, Bush Sr. fabricated the existence of climate change in order for legislation to be enacted upon China, to slow their rapid growth and industrialisation. This claim, however, was later flipped on its head by current president Donald Trump. Trump repeatedly vocalises his thoughts on the matter, through his huge social media presence, that climate change was invented by the Chinese instead, opposed to being falsified by that of the US. He claims that China invented it for the same reason Reagan did; to limit industrialisation and to weaken the US foothold in the global economy by damaging huge fossil fuel reliant industries.

With these conspiracies flying back and forth, in combination with fears of China emerging as the next global hegemon, it is quite understandable why one may adopt this stance on climate change. However, huge amounts of China’s industry are reliant on fossil fuels and the demand thereof. For example, ⅓ of the world’s C02 emissions come from the consumption of goods manufactured in China. Thus, legislation on climate change would deplete the demand for these goods, thus damaging the Chinese economy. Moreover, their coal industry is a huge part of their economy, exporting to the likes of Australia and Russia. Once again, fossil fuel related policies would damage the demand for this coal. Equally China’s GDP isn’t that far ahead of the US for them to want to “hit the brakes” on both states progress, particularly because China is yet to modernise to the point of other developed states.

This leaves the only feasible option being that Reagan, Bush, and more recently Trump, are genuine deniers of climate change. This serves as a huge threat to our improvement and it undermines states efforts to better their ways in the environmental sphere. Why? Well the US are arguably the only global hegemon, and one which accounted for 24% of the world’s C02 emission, in 1990, despite only making up 5% of the world’s population. With the aforementioned statistics rising, the US boasts massive greenhouse gas emissions. Since they’re a liberal democracy and a superpower, one would assume they’d be leading the way for a greener future, but with Trump at the helm this just isn’t the case. Not only is he a Republican and so is subject to special interests surrounding the fossil fuel-based industries, but he appears to be a genuine denier, often using Twitter to express his views, as I outlined previously. This results in things like the US pulling out of the 2015 Paris climate change agreement and thus disrupting the chance for genuine coordinated efforts in tackling the issues we’re facing. Trump seems to negate the fact that global warming doesn’t care for state borders, making it an issue for the whole international community. Unless he changes his view, we’re in trouble.

Trump’s actions have also led to other groups of deniers doubling down on their views, increasing their already copious apathy to the situation, and they’re strong in number too. This in combination, with often radical and intrusive, agendas of deep green associates such as Extinction Rebellion, it’s understandable how one could be put off from making genuine strides to cut down on their personal greenhouse emissions, energy expenditure and water usage. After all, if the leader of the free world isn’t worried, why should we be?

It’s attitudes like this that further undermine the efforts of states in this area. Given the threat affects everyone, it needs a coordinated effort to match the severity of the situation. It needs everyone to be on board. Once again, with figureheads like Trump popularising the denial of climate change, the chances of this happening are largely compromised.

I understand, Trump is a realist. He cares only for the pursuit of the self-interest of the US. And it’s easy for a general member of the electorate to get on board with this all-encompassing attitude, especially with the promise of a greater America. However, I fail to see how Trump can understand the wider implications of his actions. But does he care? I doubt it. Is it a ploy to appeal to the American franchise? Maybe. Regardless of the answers to these questions, as it stands, if Trump is unwilling to change his stance on climate change, the world is fighting a losing battle.