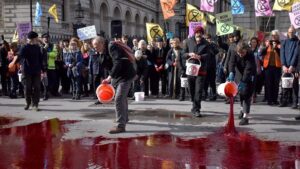 The recent Extinction Rebellion campaign used disruptive direct action, peacefully of course, and there is a long history of this sort of thing going back to Greenpeace activities in the 1970s. Yet as the scientific evidence piles up, and as therefore the moral urgency becomes all the greater, so the demands become increasingly unrealistic. Zero emissions next week or we all die! Elements of environmentalism are starting to take on millenarian characteristics. The children’s crusade of Greta Thunberg is upon us. “How dare you?” she shrieks, with purist zeal, she and her followers demanding that all other interests and all other causes must be radically subordinated to their own – for their own is the cause of all mankind. Their moral claim is absolute, as is their claim to truth. Any dissent is “denial”. The scientific consensus is irrefutable, shout all those with more time to carry placards than pore over data sets.

Peaceful movements have gone violent for far lesser causes than the very future of the biosphere. Within a few months of the catholic civil rights marches starting in Northern Ireland in the late 1960s, there were nationalist bombs in Belfast. Within a few years of Gandhi’s famous and noble passive resistance campaign in India, there were nationalist bombs in Bengal. The Black Panthers were a world away from Dr Martin Luther King Jr, but they sprang from the same source. Even the hippy movement of the 1960s, in particular contexts, warped into the far-left terrorism of the Italian Red Brigades and Germany’s Baader-Meinhof gang. Given the extremity of the stakes (as they see it at least) the wilder fringes of the green movement may yet splinter off in the same manner. The language of many green activists, however mildly spoken, is all about a tipping point being reached in the health of the planet. This being so, it may also prove to be the tipping point from peaceful activism into violence against property and person.

One might counter-argue that there is no history of green terrorism in the same way that there was with, say, Irish nationalism or revolutionary anarchism. That is true as such, but it ignores the very great overlap between revolutionary Marxism and the radical wing of the green movement. There is a very clear dovetailing in their analyses of capitalism (exploiter of the people / destroyer of the planet), of the role of the state (instrument of bourgeois capitalist oppression / serving the needs of profit-driven multi-nationals), and of the necessary course of action (bloody revolution / radical direct action). This wing of the green movement has no truck with the idea that capitalism, with its in-built innovative dynamism, may offer a technological road out of the impending crisis. Revolutionary socialists and anarchists were more than happy to use violence in the past, and I am willing to bet that if you were to bring Vladimir Lenin or Rosa Luxemburg into our own era, they would use the same analytical structure to advocate violent action as well as mass protest against the new threat.

Any green terrorist splinter movement would be global, not local. The cause is nothing if not global, after all. It would display the same decentralised, networked characteristics of current Islamic fundamentalist terrorism. Green militants may mount attacks on, say, drilling installations, ports, mines and other infrastructure directly connected to the fossil fuel industry or other industries deemed particularly culpable. They may even seek the more generalised effect of de-stabilising the global economy through anything from spectacular acts against financial hubs to the targeted kidnapping and assassination of company executives or government ministers. The numbers involved may be small, but their support base will be larger and their impact will be disproportionate.

The vast majority of informed opinion globally (including my own) will currently be very sympathetic to the message of the green movement. Habitat destruction, species extinction, plastic pollution… one could go on with the list of tragedies. All these, and probably also climate change, must be laid at the door of a malfunctioning economic system that needs a serious overhaul. It would be a shame if green terrorism were to damage a noble cause and retard that overhaul.