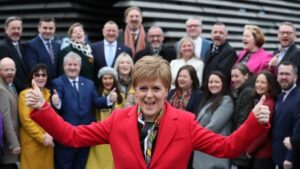 Given the divergence between Scotland and England in the recent election results, many have rightly questioned the future of the United Kingdom. The gains made by the SNP, and indeed by nationalist parties in Northern Ireland, are quite striking. However, I think that the break up of the UK is further off than is suggested by some, and in fact is unlikely to happen in the foreseeable future. I shall make a couple of specific predictions to elaborate on why I think this is the case.

My first prediction is that there will be a second Scottish independence referendum this parliament, and Scotland will vote to remain in the UK. Of course, the Tory line remains that the 2014 referendum was a once in a generation choice, and the Prime Minister has ruled out another vote for now. But while Johnson’s government may have the legal sovereignty to withhold “Indyref2”, politically he cannot fairly fend off Sturgeon’s claim for long given that the SNP won roughly an equal share of the vote in Scotland as the Tories won across the UK. If Johnson has a mandate for Brexit, surely Sturgeon can claim a mandate for another referendum north of the border. Right now, what the government is refusing to do is to devolve power to Holyrood to initiate a referendum. But sooner or later, Johnson will feel that he must go ahead and settle the matter once and for all, by legislating in Westminster to hold just such a vote.

Yet this time around, the UK government will decide on both the timing and the franchise. Brexit should come by the end of 2020 officially. Realistically it may take up to two years. But either way, most sensible Scots – even those who favour independence – will recognise that there cannot be another referendum north of the border until it is clear what the final UK-EU relationship actually is. Only then will they be voting on a settlement rather than on mere speculation. The SNP will have to run their “Indyref2” campaign largely on a remain / re-join the EU platform, because the change in the UK’s relationship with the EU was their original reason for demanding a new independence referendum. They posed after the 2016 Brexit vote as the champions of the 62% of Scots who chose remain. The SNP may clamour for a vote this year, but the Johnson government will look reasonable in holding them off until the transition period is over, and thus the choice clear.

A 2021 referendum would also come after Alex Salmond (former SNP leader and mentor of Sturgeon) has been hauled through the courts on sexual assault charges, and very likely after the SNP have been hauled over the coals in the May 2021 Scottish parliamentary elections on their very sketchy achievements governing the country they want to rule as an independent nation state. The “try before you buy” sales pitch of the SNP is not going well right now, with Scottish devolved education in particular looking in a mess.

As for the franchise, Cameron’s coalition government conceded far more to the SNP on this than it needed to. If it genuinely cares about the union as much as it claims, Johnson’s Conservative government will not be so complacent. The horse has probably bolted on votes at sixteen, but the Tories may very well give the right to vote to any Scottish-born British citizen residing elsewhere in the UK. These votes will be overwhelmingly unionist. Could wee Nicola pose between her saltires and tell us in her coached Celtic pronunciation that those sons and daughters of the glens should be denied a say in the destiny of their motherland? Not whilst granting temporarily resident European students a vote like last time around. That is my reckoning.

Could the SNP still win it? This is very hard to predict of course, and there is no doubting that Scottish nationalism has moved firmly into the political mainstream in the past decade, and may yet win through. But the 2019 general election result, taking into account that every vote against the SNP was basically a unionist vote, still indicates at the most about 45% in favour of full independence. And once a campaign gets going, the SNP will have some very awkward questions to answer, more awkward than last time around.

Will breaking away from the UK under a minority Holyrood government be a simpler matter than the UK breaking away from the EU under a minority Westminster government? It is easier breaking away from a forty-year union or a four hundred-year union? I doubt it; and if I were a Scottish swing voter, I would doubt it too given recent and ongoing events. Could Scotland re-join the EU? Can it be guaranteed that the Spanish government won’t veto accession? (The Spaniards are keen to avoid encouraging separatism because of Catalonia; and other EU member states are anxious on similar grounds, most notably Belgium, Italy and even Germany.) If the SNP cannot guarantee this core campaign pitch, then that is a lot of downside risk for voters to swallow.

What about the currency? Given that an independent Scotland will straight away be running a budget deficit that exceeds the criteria required to join the Euro, that may not be possible in the near term. It might be possible longer term but, to balance the books, Scotland would have to junk all those nice (Westminster funded) free tuition fees and prescription charges that the SNP is so keen to boast about. That’s a high price to pay, particularly when voters will be aware that the Euro has not worked well at all for its peripheral member states. But they can pay for it all with the North Sea Oil, right? Wrong. It is highly unclear who would own that after independence, and its financial returns are diminishing quickly in any case. What about remaining with the pound? That’s just taking orders from London without having a say – a sort of May Chequers plan for Scotland.

I wouldn’t want to run that campaign for all the haggis in the Highlands. So, what is my overall prediction? “Indyref2” in the autumn of 2022, 60% to remain in the UK.

My second prediction is that the nationalist swing in Northern Ireland will not threaten the union. Much has been said for a long time now about the gradual demographic drift in Northern Ireland, with Catholics steadily starting to outnumber Protestants, and in any case sectarianism is on the wane. The Irish Republic is far from the basket case that unionist firebrands once demonised, and most people in Northern Ireland take a benign and positive view of their close and borderless relationship with their now prosperous and modern neighbour. An entire generation has now grown up without any serious sectarian strife. With all the uncertainties around Brexit for Northern Ireland, this election may have signalled a shift in attitudes, with more nationalist MPs elected than unionist for the first time.

However, I cannot see this seriously indicating any sentiment for a united Ireland among any part of the province’s electorate other than the minority of firm nationalists and republicans who have never really felt any other way. More likely this electoral shift has displayed a disenchantment with the polarisation of Ulster politics and the continued suspension of the power-sharing government, with voters choosing more centrist parties. The biggest vote share gain was for the avowedly centrist and non-sectarian Alliance Party. Only Sinn Fein and the DUP – at the extremes – lost votes. This was a punishment for the shambles of Stormont, mixed in perhaps with some soft pro-EU remain sentiment (votes for the moderate nationalist SDLP also went up). It may also have registered disquiet at the messiness of the UK government’s proposed trade arrangements for the province in the event of the final Brexit deal. But it was not a vote against the union with the UK as such.

Furthermore, it should be remembered that a key clause of the Good Friday Agreement of 1998, which ended The Troubles, was that Dublin drop its long-standing constitutional claim to a united Ireland. Any move away from this position would quickly re-ignite the dormant protestant sectarianism in Ulster. When they feel threatened, Ulster Unionists have time and again in the past mobilised politically, and indeed militarily. I am not arguing that any such development is imminent. But if the British state struggled to contain and neutralise the threat of the IRA, then the Irish Republic will have no chance of containing and neutralising the Ulster Volunteer Force. Dublin knows this, and therefore has no aspiration to govern Ulster. Dublin wants a free trade relationship across the island of Ireland as far as possible, and nothing more. If Johnson’s Brexit settlement can make this work fairly effectively, then the future of Northern Ireland will be within the UK.

Some have portrayed the Conservatives as themselves a party of English nationalism, rather than of unionism. But the Tories are still the second largest party in both Scotland and Wales, and they remain openly committed to the UK. This government has work to do in seeing off the challenge of nationalism over the coming parliament. Much will depend upon the realities of Brexit. But the chances are that the United Kingdom will still be intact in 2030, and probably beyond.