Skip to content
Cranleigh School Blogs / Politics Department Blog / UK Politics / Compulsory voting is anti-democractic and would not work in the UK. 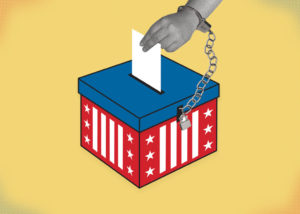 Making voting compulsory is a civil liberties violation and would be an indictment upon the rights of our people. This is because we have a right to not participate if people do not wish to vote, and therefore forcing people to vote is a crime.

By enforcing a compulsory vote would not necessarily increase legitimacy of the decisions made, as people would not vote as a result of their own motivation or from being inspired by their sense of civic duty, but rather they would vote to avoid the punishment for not voting. Another potential risk is that the legitimacy of the votes would be questioned because of donkey voting or the phallusisation of the ballot paper, and therefore are not casting a serious vote representing their true beliefs.

Another argument is that many voters are not well informed and yet they will have to vote and there will be ill-informed participation in the votes and therefore this will not increase the legitimacy of the decisions despite the higher turnout – as critics would argue. For example Emilee chapman has argued that if we leave the vote to those who are already interested in politics, then there are a limited number of views that can be put forward, however it is up to the people where they decide to inform themselves and they should not be forced to, which would be a step that would need to be taken in order to ensure that compulsory voting is carried out by informed individuals.

Another argument is that it will involve. Larger amounts of public expenditure to administer and enforce the system, and if people do not wish to vote, why should they be putting money into a scheme that will force them to do something that they do not want to do. Critics may argue that it will be worth it in order to create a society where all views are accounted for and provides a way to ensure that public officials are reminded that they are accountable for all citizens, however these officials should be well aware of this anyway and therefore this extra expenditure into a scheme that is not desperately required or sought after is unfair.

Finally making voting compulsory will favour larger parties against smaller parties, as the less informed citizens will vote and they may have only heard of well-known parties or candidates and therefore not only is that an injustice to the voters themselves, but to the democratic system as a whole with larger parties being voted for simply because of their status, rather than their beliefs.

In conclusion, we must not make voting compulsory to ensure that our civil liberties are not violated and that we keep the right to vote, or not vote. The argument that legitimacy will be increased by the higher turnouts is far from being that simple, with fallusisation, donkey voting, uninformed voters all questioning this argument and therefore it cannot be said that legitimacy will be increased. The interests and wishes of the people cannot be forced without a backlash of protests or a lack of education within the voting system tainting its truth.