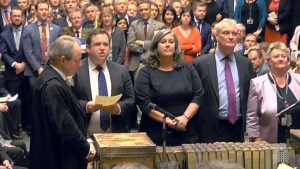 Mention to anyone that you are a teacher or student of politics at the moment and you are usually met with the response ‘oh goodness, what an interesting time to be studying politics’, or the alternative ‘can you explain to me what is actually going to happen with Brexit. I do tend to agree to an extent that it is a wonderful time to be studying the subject, far better than my own experience as a university student of Blair in the early naughties (thankfully this was eventually spiced up by an illegal war in Iraq, which did more than enough to end the endless drudgery about modernisation and decentralisation policy.

However in terms of the second question on Brexit, we are all at a loss. Professors, journalists, pundits, bloggers, ministers, MPs and even Cabinet members all do not have, in the words of Danny Dyer, “a scooby” about what is happening or indeed what is going to happen. However what it has presented is a wealth of wonderful up to date examples of politics being turned on its head in the UK that current 6th form students should be tucking into with gusto in the run up to their final A Level exams. To give a helping hand to the poor, tired, overworked, time-poor 6th form students, I have compiled some of these into a short list below:

So what has really changed. Everything and nothing really. We are still in the dark about Brexit and the future of our current government. However, students, you are now equipped with some marvellous new examples to add to your every growing political factual arsenal. Aren’t you really lucky to be studying this wonderful subject at such an interesting time!