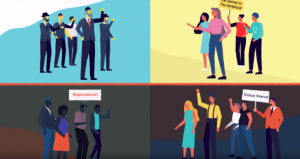 At the annual schools politics conference earlier this week I was struck by the prevalence of identity politics. What do I mean by identity politics? The tendency to attach high importance to the external and immutable characteristics of individuals, then to define them as a group based upon these characteristics, and then to ascribe rights to them upon the basis of their membership of that group. Inherent in this is some sort of narrative of persecution and emancipation. Society, we are told, is sexist, racist,homophobic and so on. The people with whom I live, work and socialise are apparently rabidly intolerant. The role of the state and the purpose of the law must be to right these wrongs, we are told, by interposing itself to even out the disadvantages of “minorities” – groups in other words, not individuals.

Thus we listened to Jess Philips MP, who struck me as a committed public servant with a sincere concern for her constituents, rail against “rich white men”, who are in a conspiracy to grind down the poor. She told us that she is inspired to stand up to the rich and powerful and, to paraphrase her, “they will threaten you, they will seek to harm you, they’ll threaten your family”. She seems to think that her twitter troll weirdos are in fact Alan Sugar, George Osborne and Philip Hammond. That was odd. But what was interesting was when she said that all-woman short-lists for Labour Parliamentary candidates demonstrate “how hard it is for women to get into politics”. Yet surely that tells us how easy it is for women to get into politics, doesn’t it? 50% of the field is knocked out straight away. The law ought to step in, it is often said, to equal out the number of women on company boards and so forth. The gender pay gap, the veracity of which I will not debate here, ought to be ironed out again by law. Your pay, your job, your chances in life ought to be substantially prejudiced by your gender.

We probably will never get to the bottom of the debate about the extent of innate differences between men and women, so let us move on to race. Morally and scientifically it is quite clear that there are no innate differences between races, beyond the very trivial. Standing up to racism was another big theme for both speakers and students. British society is racist, we were told by politicians from all parties who had clearly not visited the Middle East or South Africa. As a consequence and to right this wrong,affirmative action must be taken, for example in university admissions and employment law. John Bercow cited the Equality Act of 2010, the provisions of which go beyond banning arbitrary discrimination against people on the grounds race, gender etc, and explicitly allows for positive discrimination in favour of “minority groups”. In other words, you can be hired by a firm or admitted to a university explicitly on the grounds of your external characteristics, provided, of course, that in other respects you are equally qualified. But this last caveat is plainly nonsense, because everybody who has ever run a hiring process knows full well that you are looking at a shortlist of, say, five CVs that are all sufficiently qualified. I have never had a job interview where I wasn’t up against others who were equally qualified. We are on the cusp of a world where robots throw the other fifty CVs in the bin automatically. So this is an enormous advantage to anyone with random external characteristics such as different skin colour. Mr Bercow, a self-styled moderniser and impressive public speaker, was proud of hiring lots of BAME people into his office. This stands for Black, Asian and Minority Ethnic, and is a new term into which my fellow citizens are now patronisingly lumped, as if somehow Sikhs and Somalis identify with each other simply because they are not white. I agree that it is a really good thing that there are non-white people working in the Speaker’s office and the ceremonial roles of the House of Commons. I have no doubt that they are qualified and competent. But that is not the final reason why they were hired. They were hired because of the colour of their skin, and the law allows this to be made explicit.

Alan Duncan MP was introduced as “the first openly gay Conservative MP – that at least is something to cheer him for”. Thus did the patronising and partisan chair convey his own message that Tories are homophobic, and that the most important thing about Alan Duncan MP is not his years of public service and his record as a minister, nor his intellect, nor his character, but his sexual orientation. Mr Duncan was the only sensible voice in the room when he said, “equality has been achieved; being gay is makes me no different these days than having different coloured hair.” He is now treated equally before the law as an individual, and he knows it, but the questions from the students implied that he now ought to be campaigning for special privileges as part of a group. And indeed he and any other “minority”can receive preference and entitlement on this basis alone, all other things being equal, by law.

Rights and opportunities are not equal, in other words. And if you want to see the ugly results of this multiculturalist discourse and its insidious creep into the law, look over the pond at the wilder fringes of TrumpLand and the Alt Right. This is what you get if you place people into groups defined by arbitrary characteristics and ascribe them explicit legal entitlements on this basis. You empower some, but you dis-empower others, and they know it. The only way to have true justice and equality is for all to be equal before the law as individuals. This is at the heart of liberalism and at the root of social solidarity and stability. Multiculturalism erodes this. It degrades our mutual trust with narratives of victimhood. The justice and equality before the law that sorely needed to be achieved a generation or two ago has now been achieved. Those who want to go further remind me of the howling herd of Red Guards in China’s Cultural Revolution who had missed out on the real revolution, and wanted their own, and who had to invent oppressors and enemies where there were none.

Let’s listen to the real revolutionaries, who really did make sacrifices and face up to oppression in order to overcome genuine, legally ingrained injustices. Martin Luther King, at the Washington Memorial in 1967, told the world that he had a dream of a nation in which people “will not be judged by the color of their skin, but by the content of their character.” Or what about the words of Nelson Mandela at the Rivonia court house where he faced the likelihood of an imminent death sentence: “I have cherished the ideal of a democratic and free society in which all persons live together in harmony and with equal opportunities. It is an ideal which I hope to live for and to achieve. But if needs be, it is an ideal for which I am prepared to die.” The principle is crystal clear, and in emphasising group rights and chipping away at the true equality of all citizens before the law, multiculturalism will destroy this principle bit by bit.