Skip to content
Cranleigh School Blogs / Politics Department Blog / UK Politics / Women should have their own representatives in Parliament. 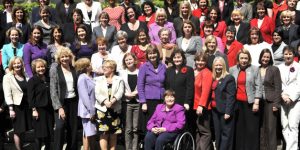 Women’s equality, although having improved greatly since the early 20th century, still has not been fully achieved. Even in the UK, the gender pay gap still remains extreme and the number of women in high end jobs remains relatively low. It is often argued that having more female representatives in Parliament would help to bring about further policy changes and highlight the ongoing gender inequality. Currently 442 out of the 650 MPs in the UK are male, meaning only 28% are female. Therefore, the possible correlation between gender inequality and the imbalanced arithmetic of the House of Commons should be further investigated.

Women’s participation in politics began in 1928, when women got the right to vote, even though this was only for women over 30. This forced parties to focus on issues affecting women and campaign towards their needs as well, since their potential voters was dramatically widened.

Abortion, as an example, has been discussed much more since then with women’s rights in mind, even seen today in the recent referendum in Ireland and the current debates in Westminster. Taking this further as to give women their own representatives, it is likely that women will fight more strongly than men for women’s rights as they further understand the issues that face women, such as childbirth and maternity leave, which men cannot hope to fully understand. More female MPs would also help much of the female electorate to feel more represented and they may feel more comfortable to approach a female. Even though MPs are trustees of their constituents, personal bias is unlikely to not creep in.

Furthermore, since gender inequality is still around, anything that could help change this from a position of power would be beneficial. Seeing women in high end positions will help to reduce subconscious bias as it will seem more normal. It will also give younger girls inspiration and this will help for future generations to reduce this gender gap even further. Drastic measures need to be taken in order to improve equality and thus change from the top, such as within powerful roles of representation. Labour introduced all-female shortlists in order to get more female MPs into the party, as they believed women needed their own representations. Similarly, businesses are trying to improve their gender ratios, in order to get more women into positions of power.

There is also evidence that female representatives are wanted within society. Labour prides itself on gender equality and having more female MPs than the Conservatives. It is viewed as the more progressive party largely because of this. There is even a Women’s Equality party, which argues that women need more representatives in order for “women’s rights to be represented fully”. Moreover, the only 2 Prime Ministers in the UK to have been female have been since 1979 and therefore this is seen to be more desired now since people (and the media) saw this as extremely positive. The 32% of female MPs elected at the 2017 election have shown a record high in the steadily increasing figure since the last time there were none in 1918.

This evident increase of support for female representatives along with the fact that women are more likely to fight for issues facing females show that women should have their own representatives, and this would also be the radical action needed to reduce gender inequality and subconscious bias.