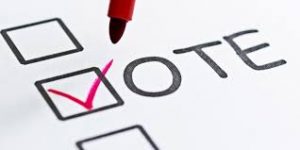 Proportional representation is a system where political parties got the same proportion of seats in parliament equivalent to as the proportion of the total vote that they (as a party) received in an election. This method was used in Germany after their revolution in 1918 and is still used today in Germany, as well as Austria, Belgium and Argentina.

Proportional representation has its positives. It stops one party gaining too much power and makes everyone’s votes count towards something. This systems enables minority parties and independent candidates a better chance of getting a majority and getting into parliament. Examples of proportional representation working in practice today are the functioning governments in both Israel and Germany.

However the weaknesses of proportional representations are that smaller, sometimes extremist parties are more likely to be elected and gain seats; if the 2015 UK general election had been held under a PR system, UKIP would be the third largest party in parliament, and they would have had 83 seats rather than just the one. It also makes it very difficult for a single party to gain a majority and no real difference to the country can be made if no party has a majority because other parties could disagree with ideas put through by the party. To gain a majority, parties would have to form coalitions, which creates a more unstable and ineffective government. This makes the system unhelpful and doesn’t fix any real problems. With coalitions formed, the government becomes weaker and tends to become indecisive.  An example of this is Italy who have had to break down its parliament 8 times in the past 40 years. Also when coalitions are formed, its takes time to discuss. In Belgium, following their 2010 general election, coalition negotiations went on for 541 days. This left the country practically ungoverned for almost a year and a half. Under a PR system, policies passed would have to be much bigger in scope, so it might lead to local issues not being dealt with. Many policies that have proven to be very useful now, wouldn’t have been able to be passed without a strong majority, such as the trade union reforms that Margaret Thatcher pushed for and Tony Blair’s policies to improve education and public services.

I believe that proportional representation isn’t a good idea because the negatives outweigh the positives. It creates an unstable and indecisive government, as well as creating a bigger chance for an extremist party to gain a majority. In the examples given, proportional representation has just created instability within their parliament, and would certainly not be good for the UK, in particular given the challenges that we are already facing with Brexit.